Many of us dream of living by the sea, and science shows coastal living could be beneficial for both our mental and physical health. Calvin Holbrook explores the therapeutic benefits of being in, on and by the water.

Long before seaside spas became fashionable for those wanting a slice of rest and relaxation, respite close to the sea was –  literally – just what the doctor ordered. During the mid-late 19th and early 20th centuries in the UK, people were regularly sent to convalesce by the coast, with sea-bathing hospitals being a common treatment. Indeed, in Victorian times, living by the sea was a way of treating those with consumption and chest diseases such as TB, as the fresh and salty sea air was believed to have curative properties.


Fast forward to nowadays, and the reason many of us take our holidays by the seaside is because we appreciate the relaxing benefits of the ocean, sun and nature. But could making a more permanent move to the coast improve our health and mental well-being in the long-run? Let’s take a closer look at the science behind how living by the sea could benefit both your mind and body.

The health benefits of living by the sea

If you're thinking of moving to live by the seaside, here are four backed-by-science health benefits that may persuade you to take the plunger and make the change to coastal life.

If you feel sleepier or more rested after a visit to the seaside, there’s clear science to back up why. Dr Natasha Bijlani, a psychiatrist from London’s Priory’s Roehampton Hospital told Metro: “Sea air is good for sleep because it’s generally cleaner and fresher, with higher levels of oxygen, which can improve sleep.” In fact, negative ions in sea air accelerate your ability to absorb oxygen, and also help balance your serotonin levels, one of the body's happiness hormones.

A seaside hike can lead to better sleep shutterstock/Paul Nash


A 2015 study from the National Trust seems to corroborate the idea that breathing in sea air helps you to sleep better. It found that people sleep on average for 47 minutes longer the night after a decent seaside hike. That’s compared to only an additional 12 minutes for those who went on an inland walk of a similar length. Environmental psychologist Eleanor Ratcliffe, who carried out the National Trust research, said: “It’s clear there’s something really special about the coast that can allow people to boost their mood, relax and sleep.”

2. The coast boosts your mental health

As well as improving sleep, recent scientific research shows that coastal living can also help in warding off depression and anxiety.


A study from the University of Exeter looked at the census data of 48 million adults in England and how their rated their own health, in relation to where they lived. The results showed that people living close to the coast experience lower mental distress, but when the same people moved inland, the effects were reversed. Dr Lewis Elliott from the University of Exeter confirmed: “We discovered that the closer people live to the coast in England, the better they rate their health.”

More recently, in October 2019, another study from the same team published in the journal Health & Place backed up their previous findings. The researchers surveyed almost 26,000 people to analyze the mental health well-being effects of being close to the coast. The results showed that those who live less than 1km from the sea are 22 per cent less likely to have mental health symptoms compared to those living over 50km away. This corroborated an earlier study from 2013 which concluded that you’re more likely to have better mental health if you live within 5km of the British coastline.

“As well as improving sleep, recent scientific research shows that coastal living can also help in warding off depression and anxiety.”


In fact, you don’t even have to get your feet wet to feel the mental and health benefits of living by the sea. Simply looking out at the vast ocean in front of you can help to put your worries into perspective. Your fears may seem trivial when you look at the skyline ahead: this is down to the power of awe. And a 2015 study showed that even just having a view of the sea can promote improvements in mood and a reduction in heart rate. Additionally, the sound of the waves can be very calming.

Physical health improvements are another potential benefit of living by the sea. Sea water is rich in minerals such as magnesium, chloride, sodium, potassium, iodine and sulphur, many of which have curative and anti-inflammatory effects on the skin. Indeed, a 1999 study from the University of Freiburg in Germany found that a combination of sea water and UVB radiation can improve troubling skin problems such as dermatitis and psoriasis. 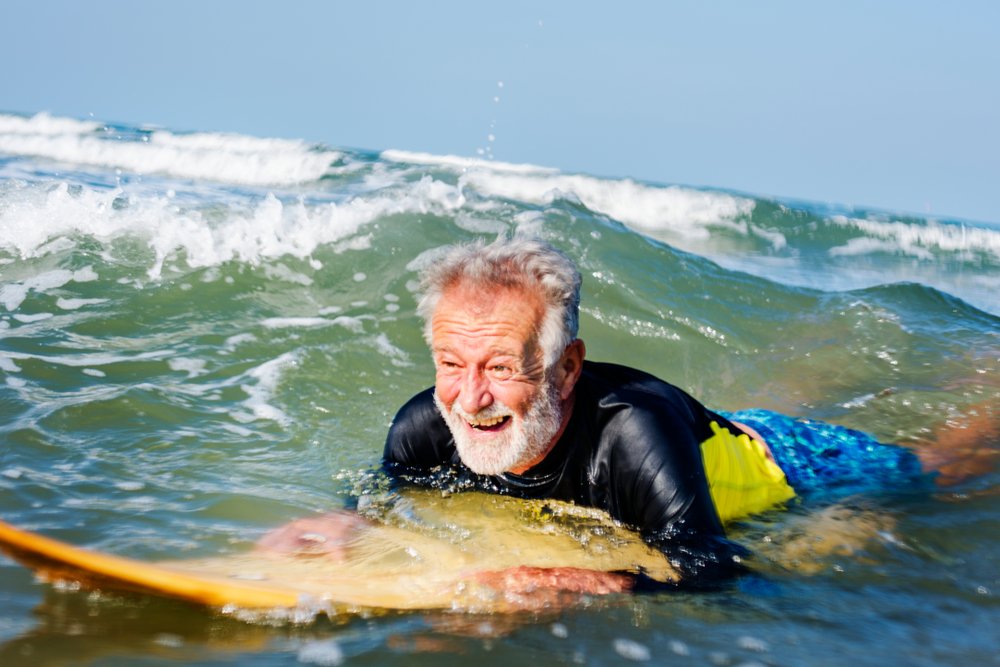 
Talking to Woman & Home magazine, Kevin Benitez Garcia of Gran Canaria Wellness explained: “Soaking in seawater is nature’s skin treatment – it’s great for sensitive or eczema-prone skin.” With psoriasis, cell turnover is high, so replenishing it with minerals that the body has used up could explain why bathing in salty sea water helps so many people.


• JOIN US! Find friends living the simple life on happiness.com •

Additionally, the sea air contains a mist of saline water, which appears to have a soothing effect on the respiratory system’s mucosal lining. So, people living with health conditions such as sinusitis could benefit from living by the sea. It seems those Victorians were really onto something!

A 2014 study  from the UK found that coastal proximity increased your chances of being fitter and healthier than those who lived elsewhere – partly due to the fact that those living closer to the sea have higher levels of physical activity. Indeed, the study found that you’re more likely to exercise regularly if you live within 1km of the English coastline.

“Physical health improvements are another potential benefit of living by the sea. Sea water is rich in minerals, many of which have curative and anti-inflammatory effects on the skin.”


Of course, the sea offers up the opportunity for swimming during warmer months, but the water also provides the chance to get involved in other sports all year round such as sailing, surfing or paddleboaring. Likewise, the coastline provides the perfect opportunity to keep fit through jogging, running and hiking.

Dr Elliott from the University of Exeter told Coast magazine: “We know that when people go to the beach, there are opportunities to be physically active and people are more likely to stay there for longer. Physical activity has a strong effect on mental health, and when combined with being in a natural, coastal environment, these effects become even stronger.”

It's clear from research that there are various benefits of living by the sea for both our mental and physical health. Studies suggest that it can help with depression and that a coastal environment offers up more chance for physical fitness. So, while we all enjoy our holidays by the sea, could a more permanent move to the coast benefit us? Science seems to suggest it does. Dr Elliott said: “the cumulative effect of actually living by the sea could have a much greater effect in the longer term.” ●

Happiness.com » Magazine » HEALTH & BODY » The 4 science-backed health benefits of living by the sea