If you constantly feel dependent on others to help you navigate through life and make decisions, you may be emotionally dependent. Psychologist Stanislava Puač Jovanović explains what the term means and offers up five ways to stop being clingy and get confident.

Being in a happy, committed relationship is intertwined with knowing that your partner has got your back. You know that you can lean on them in times of need. And this feels good. However, reliance can also be pathological. This is when we speak of emotional dependency.

This article will explain how to recognize emotional dependency, why it can make you utterly unhappy, and how to deal with it.

What is emotional dependency?

The Diagnostic and Statistical Manual of Mental Disorders (DSM–5) recognizes dependent personality disorder as an anxious personality disorder. Its main trait is an overall feeling of helplessness and feebleness. Individuals diagnosed with this disorder are often submissive. To various degrees, they are incapable of taking care of themselves.

Others would describe such an individual as needy or clingy. In the roots of such dependency on others is a profound fear of abandonment. To prevent the feared rejection, the emotionally dependent person will usually clutch onto someone they care about to the point in which closeness becomes too much.

The official diagnosis of someone being emotionally dependent is based upon these criteria:

However, as you may have noticed, the symptoms are more focused on functional dependency. Emotional dependency seems to be secondary in the official classification. This is why some authors are vocal about the theoretical, etiological, and empirical arguments for the existence of emotional dependency as a separate disorder. It goes beyond the criteria above.

For example, an emotionally dependent person might not be as reliant on others to make their everyday decisions. They could also function well as professionals. However, when they feel distressed, anxious, or insecure in any way, they lack the capacity to tackle these feelings on their own. 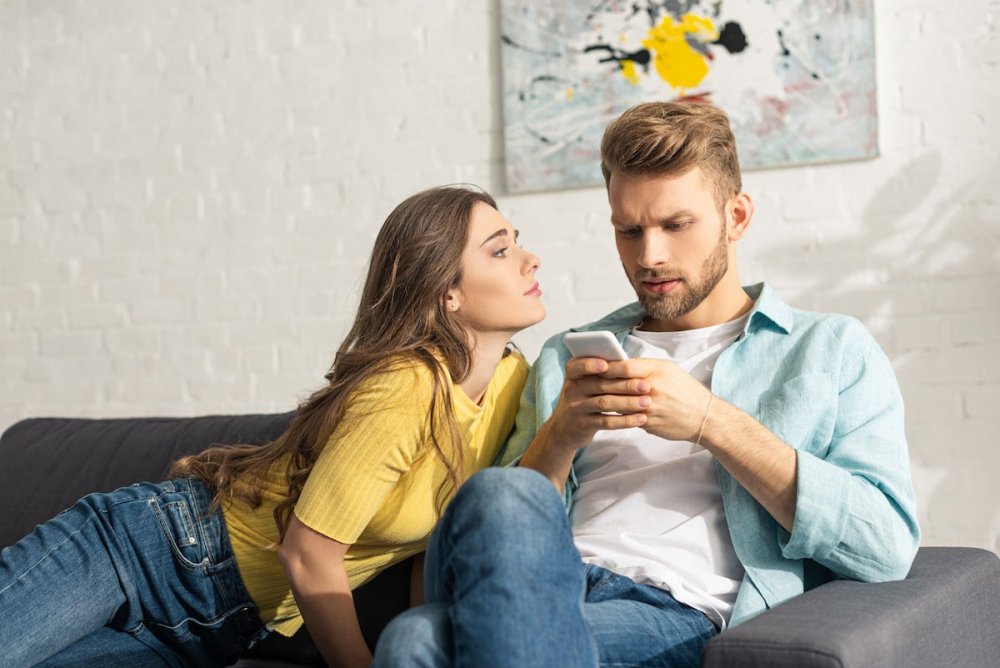 
To understand emotional dependency a bit better, it might help imagining a spectrum. On one end, there is complete emotional independence. Those are the people who hav developed an avoidant attachment style. But that doesn't mean that they are emotionally self-sufficient, which would be healthy. They are dismissive of emotional closeness whatsoever.

In the golden middle are people in interdependent relationships. They possess an optimal balance between emotional intimacy and autonomy. When they need reassurance, they will go to their partners. But they are not lost without them. They live in a healthy ratio of emotional give and take. Interdependent partners respect the other and themselves as an individual and enjoy the togetherness.

• JOIN US! Sign-up to get support from our caring community •

Finally, there are emotionally dependent individuals. They rely on their partners (most commonly), friends, or family members to meet all of their emotional needs. They experience full-blown separation anxiety when they are away from their loved ones. They are insecure and fear losing their partners. When distressed, they would not even try to calm themselves down. Instead, they immediately reach out to others. Every emotional need requires the other to be met.

How can emotional dependency impact happiness?

Emotional dependency is, arguably, a secure path towards being unhappy. It jeopardises our well-being and that of those close to us in more ways than one. High levels of stress and anxiety, poor self-care, and vulnerability to abuse are merely a few companions of emotional dependency.

Let us start broadly. The first, somewhat philosophical question we may pose is – how happy can we be if our happiness depends on external circumstances? When our emotional balance and self-image depend on what others will say or do, are we not bound to feel miserable most of the time? Emotional dependency hinders our contentment because it puts us at the mercy of things that are out of our control.

“Emotional dependency is, arguably, a secure path towards being unhappy. It jeopardises our well-being and that of those close to us in more ways than one.”

And, with the word “control”, we get to the other argument for someone to start dealing with their own emotional dependency. According to an informative analysis published in the International Journal of Reality Therapy, emotional dependency is usually enacted through pleasing others or trying to solve their problems. However, according to the author, such behaviour is equally as destructive as aggressive coercion.

Why? Emotional dependency is an attempt at controlling others. It usually is not a conscious one. The emotionally dependent person does not push anyone directly into doing what they want. Nonetheless, by being the “rescuer” or the “pleaser”, they compel others to behave in a certain manner. And forcing others to do as we please is, without a doubt, a sure recipe for unhealthy relationships.

In this way, through emotional dependency, a large chunk of the formula for physical and mental health is put at risk. Healthy interpersonal relationships are essential for well-being.

Emotionally dependent individuals tend to form a co-dependent relationship. Although one of the partners is usually the more dominant and aggressive one, while the other is more of a pleaser, both are usually burdened by emotional dependency. According to the same analysis we mentioned above, such a form of interaction results in an equal amount of unhappiness as abuse does – for both partners.

Unfortunately, we cannot say that overcoming emotional dependency is an easy task. As a personality disorder (or a part of the disorder, depending on author), it proves to be quite resistant to change. It is probably a highly persistent factor inducing anxiety and dysfunction in your life.

Nonetheless, there are many ways to tackle both the emotional dependency as such and the consequences surrounding it. Here are five ways you can start building emotional independence and strength.

You might consider talking to a psychotherapist to assist you on your path towards emotional independence. They will help you understand where the dependency comes from. You will learn to see your triggers and control your reactions to them. With professional support, you can address the underlying causes of your insecurity and helplessness to bear with emotions and challenges on your own.

2. Learn the skill of assertiveness

Assertiveness training will help you in two ways. First, it will give you practical tools to communicate with people with confidence and not fall victim to an abusive person. Assertiveness makes you more confident in setting the boundaries. Assertiveness is the opposite of submissiveness.

• JOIN US! Sign up today and make new friends at happiness.com •

Secondly, by contemplating the so-called assertive rights of each individual, you will start changing your attitude towards yourself, trusting and respecting yourself more. 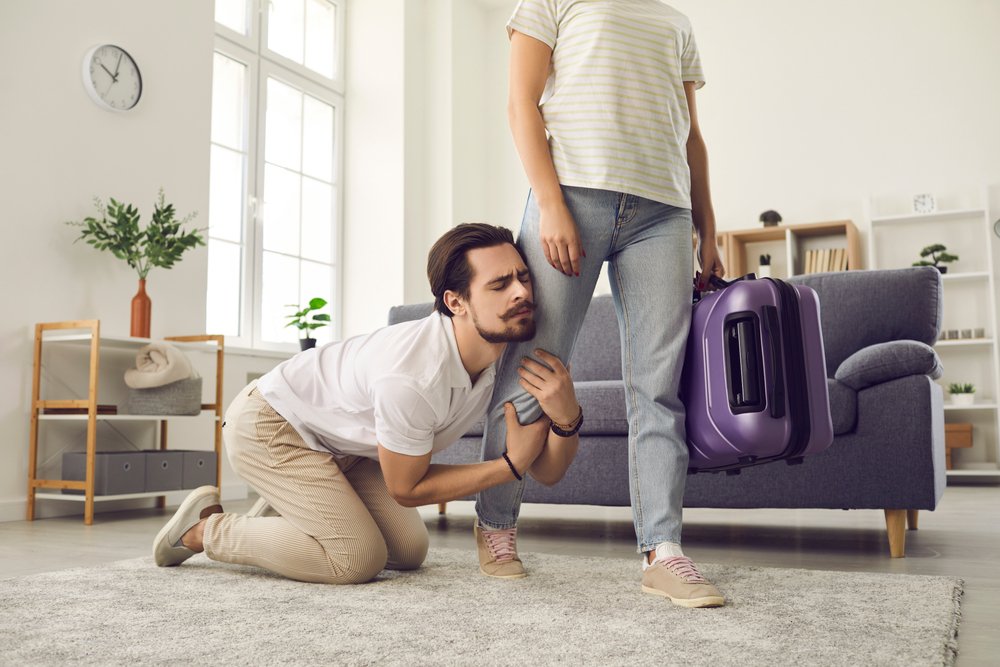 Emotionally dependent people seem to lack some of the components of emotional intelligence. Emotional intelligence means being able to recognize and manage your emotions, as well as to understand those of others and healthily connect with them. When you build your ability to, most importantly, withstand and control your emotional reactions, you are gradually moving towards emotional self-sufficiency.

When a person is emotionally dependent, they, unfortunately, open themselves up for various forms of abuse. They can easily be taken advantage of if they meet the wrong person. If you feel that your emotional dependency has led you to do things you were not proud of, what you need is plenty of self-compassion.

“Being alone is highly challenging for emotionally dependent people. Yet, try to develop the skill of feeling comfortable on your own gradually.”

Also, commit to a self-care routine (physically and psychologically). In this way, you will nurture yourself instead of needing others to do so. Respect your body and your mind and provide them with plenty of kindness. Especially if you were exposed to abuse, self-care is essential for you to recuperate.

5. Work towards feeling comfortable being alone

Being alone (being single; or even spending time alone) is highly challenging for emotionally dependent people. Yet, try to develop the skill of feeling comfortable on your own gradually. Combined with the suggestions above, you will start noticing that you can, in fact, deal with problems and uncomfortable feelings even when no one is around to console you.

For a person who is emotionally dependent, it might sound like a challenge of a lifetime to become autonomous and independent. After all, you probably spent your entire life feeling this way. You always needed others to feel secure and reassured. You built your entire life around emotional dependency, one way or the other.

Maybe you feel too deeply rooted in your co-dependent relationships. Could you change your entire social environment? Would you even want to? It probably feels terrifying, as that is precisely what you have feared your entire life – being on your own.

However, there is a healthier way to relate. It involves being with and not depending on others. And, the best news is – it can be done. You can do it. With the right kind of help and a will to break free from emotional dependency, you too can become a self-sufficient and confident person. So, find support and start making the first steps towards a new, liberated life. •

Are you overthinking about past mistakes? Rumination, an element of OCD, is an unhealthy form of worrying that can lead to depression. If you're

Goal setting: use SMART goals for motivation and easy success

Find trouble getting motivated or sticking to your goals? By using the SMART technique, you can focus harder says Dee Marques. And if you combine it

Poverty, hunger, homelessness: human injustice is ever-present throughout the word, but what can we do about it? Sienna Saint-Cyr takes a looks at

How to mobilize men against sexual harassment

Many forces undermine efforts to help men to empathize with women and speak out against harassment and assault. Elizabeth Svoboda – on behalf of