While the news agenda is still largely dominated by Coronavirus, let's celebrate that there are still great things happening in our beautiful world. Ed Gould shares his Top Ten round-up from June to uplift and inspire.

It's always been possible to buy clear plasters or those with differing tonal qualities, but one of the leading plaster brands, Band-Aid, has never produced products that were designed for all skin tones. Following a long-standing campaign that gathered momentum under the Black Lives Matter protests, Johnson & Johnson – which owns Band-Aid – has decided to alter its production. The company announced in June that it would now make at least five different coloured plasters.

2. Colourful harlequin toad found not to be extinct

Often considered one of the most attractive amphibians, the Mindo harlequin toad was thought to have died out or, at least, to have been on the brink of extinction. This wonderfully camouflaged toad had been suffering from a fungal disease that had devastated its population. However, new sightings of the amphibian were reported in June, leading biologists to think that after three decades in the wilderness, the toad has finally developed resistance to the disease.

According to News Medical, a team of researchers from Australia and China has been studying the effects of oxygen deprivation on the brains of babies as they're born. The scientists have discovered that a mitochondrial protein, known as COX5a, plays a pivotal role in helping to prevent brain damage when the oxygen supply is cut off or restricted. It's hoped that a new treatment can now be made to help infants undergoing difficult births which will protect their brains from oxygen deprivation-related damage.

As reported in Well + Good in June, John Hopkins University has launched an online course that anyone can sign up to. In response to some of the privations of lockdowns around the world, academics developed a psychological first responder programme. Part of the teaching involves helping people to acquire the skills to be more of a reflective listener. It's hoped the course will help people to make assessments of the mental well-being of those around them. It could, potentially at least, save many lives, as people know how to respond better to feelings of anxiety, depression and isolation.

5. Spontaneity has been found to make people happy

As reported in the New York Post, being spontaneous is not just about living in the moment – it can make you feel happier, too. If you're the sort of person who likes to plan everything, then try a few more spur of the moment decisions: you could find that you feel happier as a result. This feel-good news story came after no fewer than 2,000 Americans were asked about their attitudes to spontaneity and happiness levels. Those who were more instinctive were found to suffer the least from unhappiness. 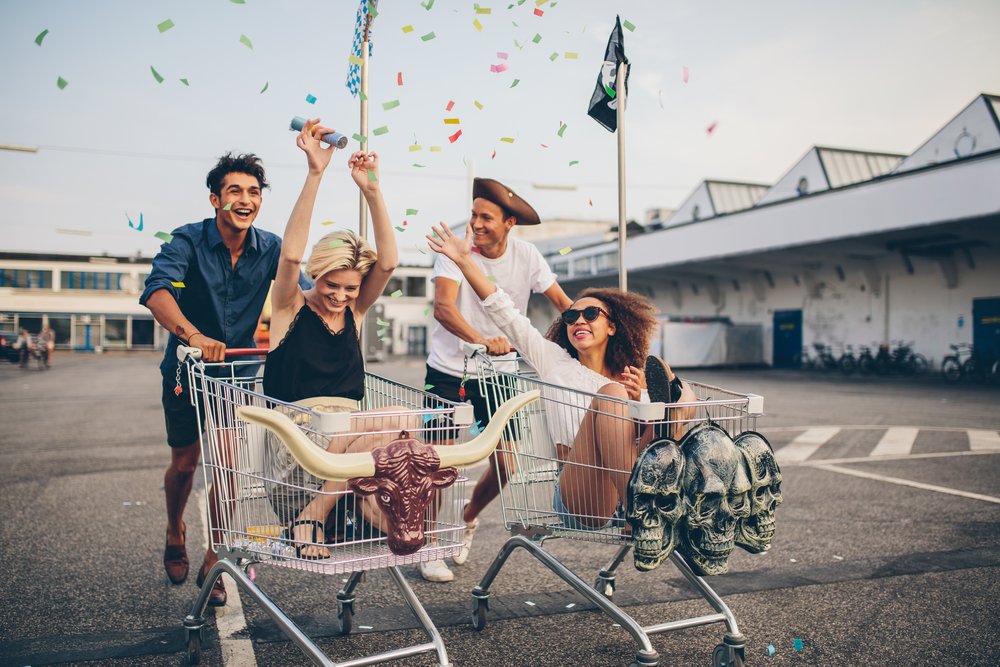 Go off your trolley and get happier! shutterstock/Jacob Lund

In a report published in Psychiatry Advisor, it has been scientifically shown that following a more mindful approach to life can help alleviate the worst symptoms of clinical depression. The study was based on a large survey that was conducted on people who had been following mindfulness-based compassionate living, or MBCL. The study took place in the Netherlands and it followed a group of individuals who had first been recruited back in 2013. The extensive survey found that those who followed MBCL were less likely, on average, to suffer from the most severe symptoms of depression.

There's been little feel-good news recently on the subject of medical personal protective equipment (PPE). Since demand has soared, most countries around the world have struggled to source adequate supplies, leaving many short of stock. However, in Uganda, a start-up business found that it was able to make PPE by recycling plastics. Old plastic was melted down and formed into face shields and other equipment, according to All Africa. The move is a big plus for the environment as well as healthcare workers who continue to be on the front line in the battle against the global pandemic.

There have been few feel-good news stories about the global epidemic but a couple did come through in June. One related to Dexamethasone, a cheap medication that was found to significantly help severely affected patients. The other was that sniffer dogs have been found to be remarkably accurate in detecting the virus in people. According to the Guardian, our canine pals could even prove themselves to be more accurate in detecting the virus in its earlier stages than other methods, thereby helping to prevent the spread of the contagion.

Paws for thought: dogs could sniff out COVID-19 shutterstock/aonip

9. Breakthrough in aggressive breast cancer made

Researchers from Tulane University in New Orleans have announced that certain aggressive types of tumour can be stopped by turning off the function of a certain gene. Dr Reza Izadpanah, who led the research team, said that the gene – known as TRAF3IP2 – would play a big role as the target of new breast cancer treatments. Izadpanah said that by turning off the gene a disruptive effect on the metabolic pathways of cancer cells could be achieved. Medical News Today reported that 268,600 new cases of aggressive breast cancer were discovered in the USA alone last year, so this breakthrough is likely to have a big effect on future treatments.

The sunny weather enjoyed in much of the northern hemisphere during June hasn't only been good for lifting people's lockdown spirits. It's also helped to produce lots of renewable electricity, too. Although solar farms work in any light conditions, sunny weather clearly makes them much more efficient. According to a report in Solar Power Portal, solar irradiation was one-and-a-half times its usual level in England recently which has meant that a lot more energy has been produced. Thanks to the UK's solar farms, around a third of the country's electricity was made from solar energy at peak times, thereby reducing the reliance on fossil fuels. ●

The power of pottering

Like most of us, Dee Marques spent more time inside at home in 2020. It gave her the opportunity to discover the power of pottering –

New year blues and depression: 7 ways to beat it

Once the festive season is over, for many of us the January blues and new year depression start to set in. But there are ways to fight back and feel

Many of us are guilty of self-criticism, and this trait ultimately makes us weaker and less capable. Self-love, on the other hand, pulls us to a

The power of pottering

Like most of us, Dee Marques spent more time inside at home in 2020. It gave her the opportunity to discover the power of pottering –