In Victorian times, everyone loved their bicycles, including women. James Holloway examines the reason why this was considered obscene by some and how, in fact, cycling worked to liberate the female sex.

Different ages see the journey to happiness in a variety of ways. For many, it takes the form of an actual trip – the ability to travel freely from place to place. The physical freedom of the journey is also associated with other kinds of freedom, including sexual freedom. That was the case in the strange controversy over Victorian women bicyclists and their liberation on bicycles.


'Ordinary' or 'penny-farthing' bicycles, with their distinctive high front wheels, had been around since the 1870s, but they were awkward and unstable. Riding a penny-farthing was a task for a hardcore cycle enthusiast. Their frames also made them impossible to ride while wearing the long, full skirts expected of Victorian women.


In the 1890s, however, the combination of inflatable tires and the new 'safety' bicycle frame – essentially the style of bicycle frame we use today – made bicycles more accessible to everyone. To the shock and horror of many Victorian commentators, 'everyone' included women. Women around the world enthusiastically accepted cycling as a way of liberation on bicycles. In her 1897 handbook Bicycling for Ladies, Maria Ward wrote:

“Riding the wheel, our own powers are revealed to us, a new sense is seemingly created. You have conquered a new world, and exultingly you take possession of it.”

The thrill of speed and independence appealed to women who discovered a newfound joy in being able to travel where they wanted under their own power. For people who had often had a restriction in their ability to move freely, this newfound liberty was exhilarating. Ward stressed that cycling gave women not only freedom of movement but also the power of choice:


“You are there to do as you will within reasonable limits; you are continually being called upon to judge and to determine points that before have not needed your consideration, and consequently you become alert, active, quick-sighted and keenly alive as well to the rights of others as to what is due yourself.”


Ward's words reflect a sense of the exciting possibilities of independence. A path to happiness that made cycling popular among the members of the growing women's rights movement.

Liberation through bicycles: one person's joy is another's hate

But as any social historian will tell you, whenever someone discovers a new way to enjoy themselves, someone else is going to be against it. Liberation on bicycles for Victorian women was no exception. Critics suggested that Victorian women who rode bicycles would turn into men, developing muscular, masculine figures. They warned against the risk of “bicycle face.”

“The thrill of speed and independence appealed to women who discovered a newfound joy in being able to travel where they wanted under their own power.”


Additionally, they went absolutely berserk over the “rational” clothing that many women wore when riding to keep their skirts out of the cycle's moving parts. They suggested that women didn't really enjoy cycling. Rather they only wanted to pedal for a few minutes, then get off and gossip. And, contrarily, they also suggested that women liked cycling a little too much...

How did women ride before the modern saddle?

Since the Middle Ages, the social convention had been very much against women straddling, well, anything! Ladies who rode horseback, at least in Europe, were expected to ride sidesaddle. Now, here they were, sitting astride bicycle saddles, with the leather seats pressing right up against their genitals. Who knows what they might be feeling?


Worst of all, some of them were “scorching” – leaning forward over the handlebars to go faster and putting pressure on, well, the lady parts! One writer warned that pressure on the clitoris from scorching could create: “feelings hitherto unknown and unrealized by the young maiden.”

“Here they were, sitting astride bicycle saddles, with the leather seats pressing right up against their genitals. Who knows what they might be feeling?”


Leaving aside the question of why putting pressure on the clitoris and giving women strange new feelings isn't necessarily a bad thing, you might be astonished to learn that modern medicine doesn't put a lot of faith in this idea. The idea was silly enough on the face of it, as you can tell from the fact that Victorian lady cyclists weren't constantly having orgasm-induced crashes. 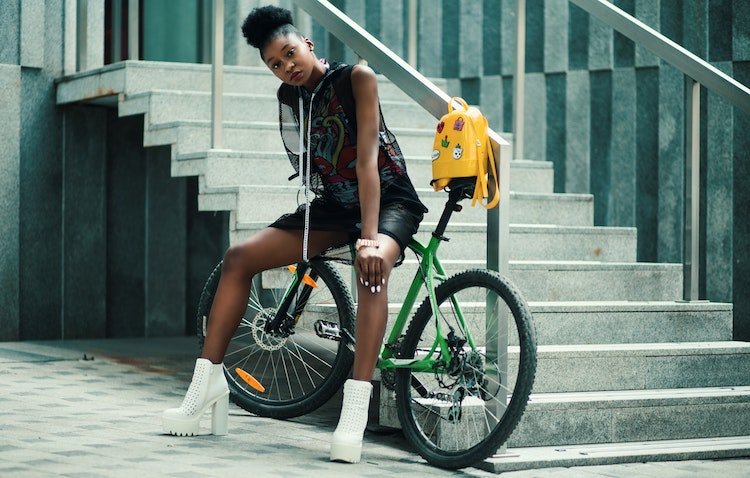 Ride of your life: but was the liberation also sexual?


In fact, modern doctors are more likely to be concerned with the idea that cycling makes you less likely to experience sexual arousal. Studies have suggested that riding for long periods can lead to numbness in the genital area. The consensus seems to be that, you guessed it, special saddles and a more upright posture can be helpful for both men and women.

Why were Victorian and Edwardian moralists so outraged by the idea of women cycling and finding liberation on bicycles? There are several reasons, most of them to do with the fact that cycling women were intruding on traditionally male territory.


In Victorian thinking, Ellen Gruber Garvey argues, women were stationary, and men were mobile. The outdoor world of travel, athleticism and free movement traditionally defined as male. Any female intrusion into it was a threat to that order. After all, women who went out cycling were traveling without any male supervision. They could put themselves in all kinds of danger or expose themselves to all sorts of temptation.

“The idea was silly enough on the face of it, as you can tell from the fact that Victorian lady cyclists weren't constantly having orgasm-induced crashes.”


Female cyclists came under the same criticisms as women's suffrage advocates. They were mannish, they were ugly, they were sexually promiscuous. Of course, Victorian objections to women cycling didn't last; gradually, women cycling – even in trousers – came to be socially accepted.


The moral panic about women finding liberation on bicycles turned, in the early 20th century, into a moral panic about women driving. Now they could really go anywhere. In a vehicle that one 20th century American judge called “a house of prostitution on wheels”. Once again, womens' quest for happiness and self-actualization became viewed in sexual terms. And it still is in some places: check out this tweet from 2016.


Admittedly, Saudi Arabia is kind of an outlier, but the idea is still present, even in a small form. In the rest of the world, though, women and men can take to the open road on their bicycles and enjoy themselves without restriction. They probably won't have any spontaneous orgasms, though. Sadly. ●

How tuning in to your body can make you more resilient

By balancing our physiology and nervous systems, body-based practices can help us through hard times. By Linda Graham on behalf of Greater Good