The benefits of hugging: 7 reasons to embrace more often

The coronavirus pandemic meant that embracing our friends and family had to be limited. But the mental health benefits of hugging are huge. Dee Marques shares seven science-backed reasons to reach out and make a difference – as soon as it's safe to do so.

“Sometimes, you just need a hug”. This may be one of the most repeated sayings of popular wisdom, but, in fact, science shows that there is a lot of truth to this sentence. Sadly, during the Coronavirus pandemic the majority of us have been strongly advised not to embrace friends, family or loved-ones. The pandemic has lead to increased levels of depression and anxiety and one of the simplest things we could do to ease that pain – share a hug – has been denied to us.


Over the past year many of us have realised just how important personal affection and touch is. During 'regular' life, in our pursuit of happiness we usually focus on things like personal development, health and relationships with others. But sometimes, we place too much importance on long-term goals, and we overlook the power of smaller but equally effective things. One of those things is the benefit of hugging others and how this gesture contributes to our overall well-being.


In fact, giving or receiving a hug can do wonders for our mood. When stress piles up and life gets tough, a hug can be way more helpful than any words of encouragement. And there’s a reason for that: as humans, we are wired to respond to touch and physical proximity, and there’s a strong connection between touch and emotion.

Indeed, as hugging is so important to our happiness and well-being, let's explore seven of the main benefits of hugging and the role this gesture plays in improving our mental and physical health. As you'll discover, embracing friends and family – even strangers – is a powerful healing tool, so we encourage you to enjoy it as soon as it's safe to do so.

One of the most obvious benefits of hugging is stress reduction. You only need to think about how much of a relief you feel when you’re stressed and receive a genuine hug. The science confirms this too: a 2010 study from the University of California, Los Angeles, found that participants were better able to cope with physical pain and stress related to unpleasant situations if they were arm in arm with their partners.

More recent research from 2018 suggests that hugs act as a buffer against negative experiences. Michael L. M. Murphy, Denise Janicki-Deverts, and Sheldon Cohen from the University of Pittsburgh carried out a study involved just over 400 adults. The results showed that unhappy or negative  experiences – the kind that might normally ruin our day – actually become much easier to deal with when we receive a hug from a loved one. 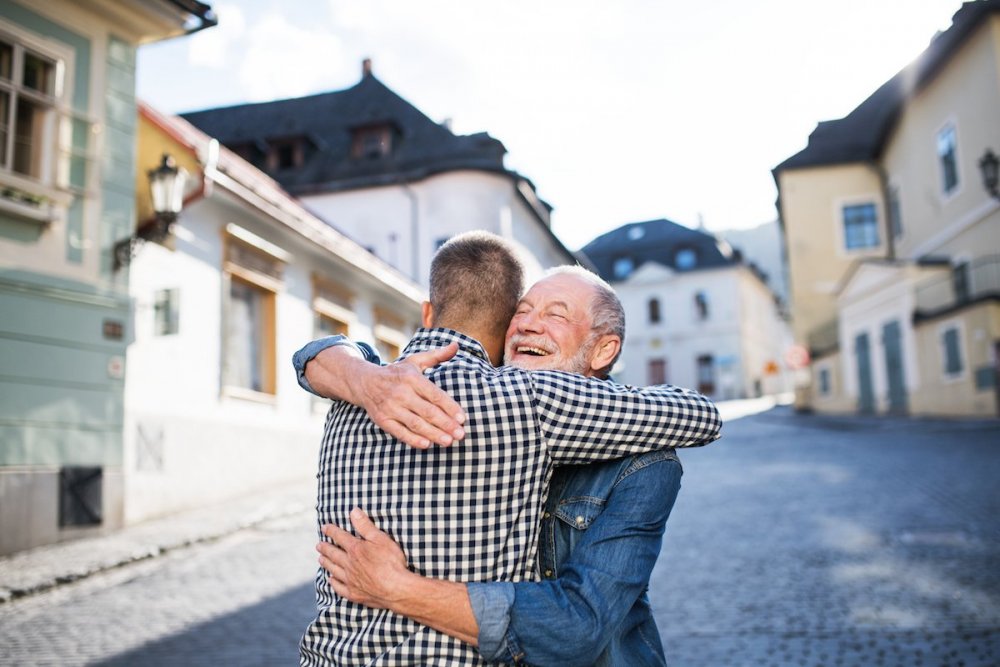 The negative effects of fear, anxiety, and low self-esteem can also be reduced by hugging or being hugged. Research from the VU University Amsterdam has found this to be true even when a hug is reduced to a one-second pat on the back or to touching an inanimate object, such as a teddy bear. “Even fleeting and seemingly trivial instances of interpersonal touch may help people to deal more effectively with existential concern,” explained lead researcher Sander Koole.


Interestingly, some believe that many people are touch deprived and that’s precisely why they experience low mood or anxiety. In this scenario, the powerful benefits of hugging become obvious.

A stronger immune system is one of the surprising benefits of hugging. Just as stress can wreak havoc with our immune system, science suggests that hugging can strengthen it. For example, a 2014 study from Carnegie Mellon University had around 400 people document their perceived sense of social support (including whether they received hugs) and later exposed them to the common cold virus. Researchers discovered that the risk of infection was lower among those who felt they had strong support and who were hugged often.
The study's lead author, psychologist Dr. Sheldon Cohen, told Psychological Science: “We know that people experiencing ongoing conflicts with others are less able to fight off cold viruses. We also know that people who report having social support are partly protected from the effects of stress on psychological states, such as depression and anxiety.”

Hugs also reach the heart, quite literally! Scientists from University of North Carolina at Chapel Hill have found that better cardiovascular health is another of the benefits of hugging. Their 2003 study showed that even a 20-second hug with a romantic partner had beneficial effects for the heart, including lowering blood pressure and improving the participants’ ability to deal with stress.
This is hardly surprising, since hugging is the physical demonstration of affection and there are other studies that already hint at the link between affection and better cardiovascular health. Furthermore, it seems that women’s cardiovascular systems are particularly receptive to hugs.

Hugs can also act as a pain reliever. In fact, the evidence to date has led researchers to consider hugging as a form of therapeutic touch. In a 2004 study from Wichita State University and the Kansas Heart Hospital, the concept of therapeutic touch was tested on people who suffer from fibromyalgia, a condition that causes pain in bones and muscles. The results, published in Holistic Nursing Practice, were very encouraging, as participants reported a statistically significant decrease in pain as well as an increase in quality of life.
The results of the pilot study tested the effectiveness of six different therapeutic touch treatments and strongly suggests that therapeutic touch may be an effective treatment for relieving pain and improving quality of life in those with fibromyalgia and, perhaps, other pain-causing conditions.

When learning about the benefits of hugging, we cannot forget that this action is also an alternative form of communication. As humans, and whether we realise it or not, we rely enormously on body language and non-verbal communication. Some studies have found that strangers were able to accurately communicate emotions ranging from fear to gratitude just by using different types of touch. Imagine the all positive emotions that can be communicated with a hug!

Last but not least, one of the benefits of hugging is that it increases the production of oxytocin, one of the happiness hormones which is responsible for creating that warm fuzzy feeling. The levels of oxytocin in our body rise when we touch or are physically close to someone, and this has been shown to prompt bonding and make us more trusting. Research is still ongoing on the powerful effect of oxytocin in our body, mind, and emotions. For now, why not enjoy that oxytocin rush that comes after giving a hug?

Benefits of hugging: the takeaway

In an increasingly touch-averse world, physical contact can be a fantastic mood booster. The benefits of hugging range from better heart health to a higher ability to cope with pain, stress, low mood, and disease. Hugs also communicate positive emotions and contribute to our happiness by strengthening our bonds with others. So, if you’ve just missed National Hugging Day, why not consider turning every day into a hugging day? ●

Are you a perfectionist? Always seem to be busy? Do you find it hard to say ‘no’? Then you may be living with high functioning anxiety. Psychologist

Do you believe the idea that money can’t buy happiness? Think again. Research suggests that cash can improve well-being to a certain level. But, as