Young people often struggle with grief following a loss, but a new app, Apart of Me, could help change that. Tine Steiss sat down with co-founder Louis Weinstock to find out more about this exciting project.

Louis Weinstock is the co-founder of Bounce Works, a London-based social enterprise that creates connected products to help kids thrive. Apart of Me is its latest project; a safe virtual space to help young people deal with grief.


Designed by experts in child psychology and bereaved young people, Apart of Me is a ground-breaking mobile game which helps young people cope with life-limiting illness, death and loss. It enables users to record and securely store memories of loved ones, build emotional resilience, and turn their suffering into a source of hope for others.


The game was launched following a successful crowd-funding campaign in 2017. We sat down with Louis Weinstock to find out more about this now award-winning project.

How did you come up with the idea for Apart of Me?

Louis Weinstock: “I was working in St Joseph's Hospice in Hackney (London, UK), counselling both families where a parent had a terminal illness and also bereaved young people. I saw how the young people I was working with were just a tiny fraction of the numbers of young people around the world dealing with the death of a loved one without the means or support to process their often very difficult feelings.


“I saw how unresolved grief can lead to much greater problems like drug addiction, mental illness and criminality further down the line. I also saw how bereaved young people had their digital memories of their loved one kept in chaotic ways on their phone amongst pictures they wouldn't want to share with their therapist or anyone over the age of 21! This made it difficult, awkward for them to honour, remember or talk about their loved one to other people.”

Is it in any way comparable to the movie Inside Out, which was an excellent way to engage children in talking about emotions.

“I loved the movie Inside Out. And in some ways using an animated medium is the best way to teach anyone about emotions, never mind just children. We do have a 'cave' in the game where the user catches fireflies in a net, and each firefly represents a different emotion.


“The user is then supported to experiment with different strategies that can help them find peace with that emotion. But a key difference is that Inside Out is aimed mainly at younger children. Apart of Me is designed for teenagers, so we have used a more nuanced explanation of the emotions around grief, drawing on my experience as a child psychotherapist and 17 years working with children and families.”


Watch how Apart of Me works

What was the inspiration?

“The inspiration was a boy I worked with at the Hospice. He was 15 when I started working with him. His dad had died from liver cancer six months before we met. This boy had been badly affected by his dad’s death: he got kicked out of school, started having around with the wrong crowd, was struggling with his emotions, and had no support. He showed me what happens when a young person doesn't have the right support to find a way through grief.


“That’s when I realised we needed to create a highly effective, interactive, therapeutic game to help bereaved young people cope with grief. I'm pleased to say that that boy became an ambassador of Apart of Me and is now doing well. I spoke to him yesterday, and he told me he loved his college course, and he was teaching himself to play the guitar on his dad’s old guitar!”

Fantastic! So, what is Apart of Me about?

“Apart of Me is based on a character you control, who lands on a beautiful and peaceful island, to meet the Oracle, your wise guide. The Oracle explains that he has been through something similar to you, and he wants to help you to train up to become an Oracle too. Your job is to explore the island, complete the quests, and go through different levels to train to become an Oracle yourself, so that you can share your wisdom with other bereaved young people around the world.”

And what's the main mission of the project?

“The primary mission is to help young people find hope and courage when someone close to them dies. Too many don’t. Did you know that 25 percent of under 20s who commit suicide have experienced a bereavement in childhood? And that 41 percent of young offenders have lost someone when they were younger? Alongside this mission, we want to help families feel more comfortable talking about death. Being aware that life is precious, a gift can help us all to make the most of each moment.”

Which solutions does Apart of Me offer?

“So, we have four features in the game at the moment. The images below are probably the best way to demonstrate what we've done so far.

Cave: which is about wisdom.

The inside of the cave is a mysterious place for catching fireflies, exploring emotions, and hearing user stories from other young people around the world.

Message in a bottle: which is about connection.

Each day, a new bottle arrives on the island, containing a quest for the hero. These quests encourage face-to-face connections with your parent(s) so that you can co-curate a beautiful treasure-chest of memories, and check in with these memories whenever you want. This feature is a digital version of the 'memory box' practice commonly used in grief counselling.

Waterfall: which is about peace.

The Waterfall is a place to find some peace with our mindfulness meditations designed to support the grieving process.

Perspective on death: What happens when we die? Explore this big question by searching for the mysterious rocks on the island, listen to perspectives old and new, and develop your understanding.

Who is the target group?

“The primary target group is disadvantaged young people who have a parent who is dying or has already died.”

How are those solutions specifically tailored to children?

“These solutions are tailored to young people. Traditional counselling is two people sat in a room. While this can be very effective, a lot of young people are more comfortable these days in digital spaces. These are the worlds they inhabit. So all the solutions in this game are based on tried and tested therapeutic techniques, just put into a medium and in a way that young people find highly compelling.” 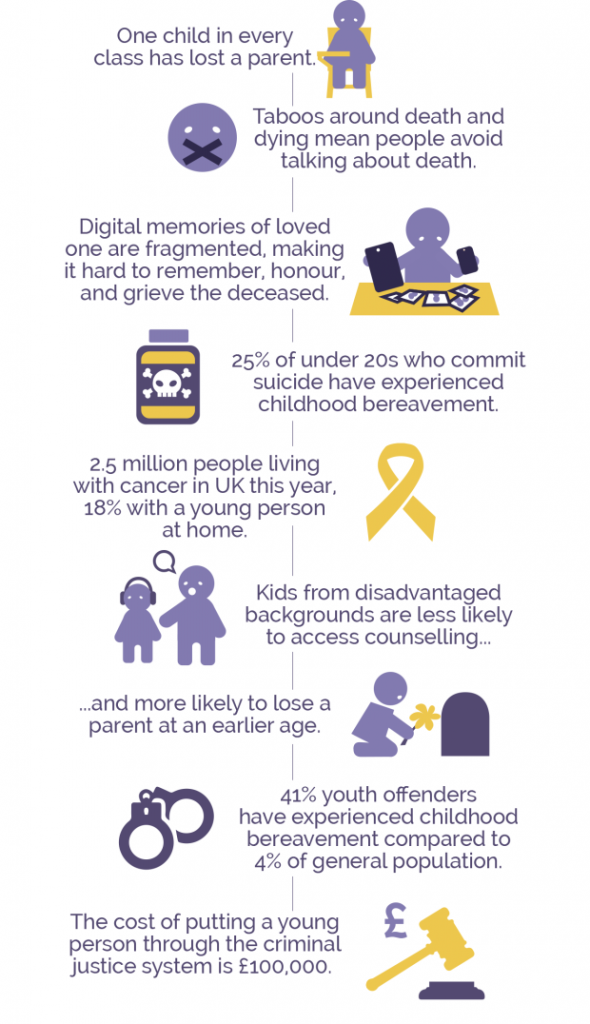 What is the motivation of the people behind this non-profit?

“We're motivated by the growing crisis in young people’s mental health. We believe that we need scalable solutions that give young people the perspectives, the understanding, and strategies they need so that they can be free from their suffering and find hope and meaning in their lives.”

Which parts of modern research regarding resilience are incorporated and how?

“Well, first, it's crucial to say that resilience in grief is difficult to define. What do we mean by resilience? Do we mean feeling better, less sad, or happier? Grief takes so many different forms that it's unhelpful in my clinical opinion to map out a straight line with grief at one end and ‘end-of-grief’ at the other. I love the psychotherapist Patrick O’Malley’s simple clarity: that the depth of a person’s sadness in grief is often a measure of how much love was in that relationship. When somebody close to you dies, life takes on a new meaning, a new story and grief often become a part of that new story.


“Most modern research into resilience takes into account the resilience of the system around the young person. So, a young person who has two very supportive parents, a supportive wider family, and a caring school, community or society which allows time and space for people to grieve… that young person is far more likely to find a way through the grief without having scars that are too deep.

“So, in the game, we encourage the user to build relationships outside of the game with people they can trust. We are also designing features which allow bereaved young people to support each other in safe and meaningful ways.


“Finally, and this is probably the most important, one of the things that breed huge hope and build resilience is when someone who has suffered finds a way to turn their suffering into a source of hope and wisdom for others. In the game, the user’s objective is to train to become an Oracle so that they can upload their wisdom and use that to help other young people who are earlier on in their journey.”

How do you plan to move the project forward? What are the next steps?

“So, we are about to launch a crowd-funding campaign on Indiegogo. We hope we're going to raise a lot of money, so we can realise the very exciting and important plans we have, including creating a version of this resource for refugee children who are bereaved.” ●

2019 update: Apart of Me is now freely available in the UK, EU, Canada, Australia and New Zealand from both the iOS App Store and on Google Play. Bounce Works are hoping to release Apart of Me in the US and other territories in the near future. They are also planning to create localised versions translated into various languages. If you're interested in helping to customise Apart of Me for young people in your country, please get in touch. 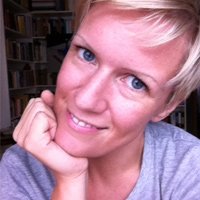 Tine is part of the happiness.com team. She's an artist, meditator, media engineer and MBSR teacher. If she's not traveling she's working on turning her rooftop terrace into a garden paradise. Find out more about her on: Instagram.

The six qualities of true friendship

Sonia Vadlamani discusses why longstanding social connections matter for our well-being and happiness, and the key qualities that true friendship