Uncomfortable truths: how to say 'no' and prioritize your happiness

Due to the awkwardness involved, we sometimes fail to disclose uncomfortable truths and choose to appease others instead. Veronika Eicher reveals her strategies on how to come out with the truth more easily in difficult situations and reduce the related emotional stress.

I find that in many circles uncomfortable truths are not addressed at all. We prefer to suppress our own urges and wishes, instead choosing to smile politely and concede to whatever other people want. Privately, however, we actually get quite annoyed. We either find ourselves doing something that we are, in fact, reluctant to do, or get angry at the others (who then don’t even understand why we're upset).

These uncomfortable truths which remain unsaid use up a lot of energy. Depending on who is being addressed, whether it be one circle of friends or another, family or distant relatives, there are many different topics and situations which contain uncomfortable truths.


Is it the case that everyone, like me, puts on a brave face when confronted by uncomfortable truths and goes along with whatever the others desire? I hope this isn’t the case, because it would otherwise mean that many interpersonal relationships are based on dishonest facts.


However, I fear that this really is the case, as I constantly find it difficult to come to terms with my uncomfortable truths. This was particularly true during my school days, and I don’t like reminiscing about this time when bullying was omnipresent. 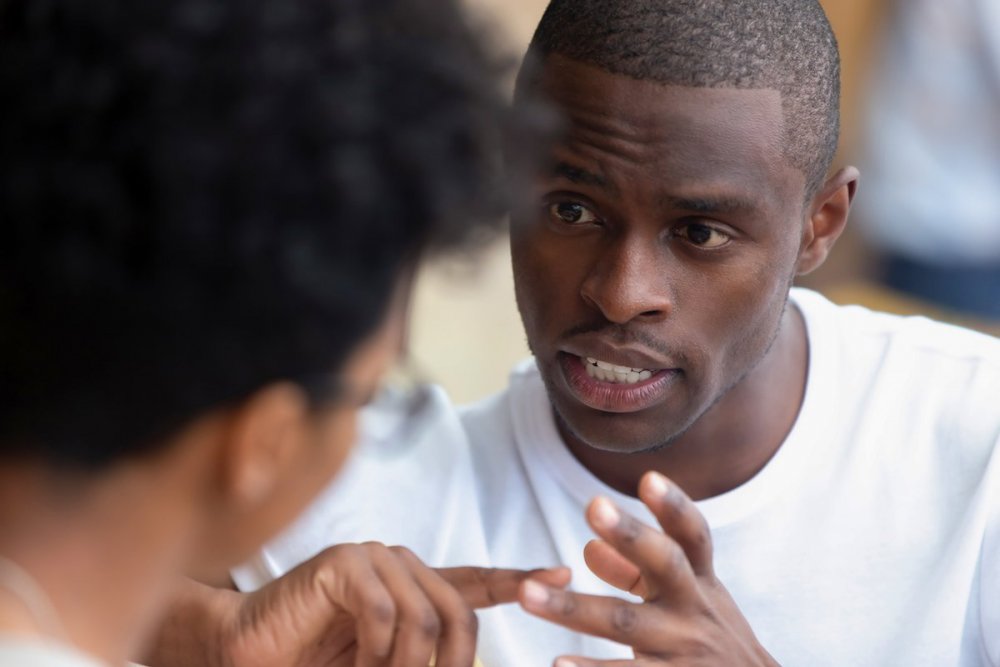 When uncomfortable truths become an issue, friendships can suffer

Nowadays, I find myself admired by many friends for having a certain trait. I tend to say what I think — even when it’s uncomfortable – both for me and the others. At the same time, I try to draw a line when I feel that someone else may be offended by my reaction. Sometimes, though, it’s difficult to know where to draw the line as people react differently.


I'll give you an example of a recent incident involving an uncomfortable truth. It concerned a student from a study group who had spent the last two weeks alongside me in my community. She learned from my husband about my Spanish course and suggested that she wanted to come along. I found out about this from him during lunch and could already sense whilst he was telling me about it that I wasn’t OK with it.

“Is it the case that everyone, like me, puts on a brave face when confronted by uncomfortable truths and goes along with whatever the others desire?”


There really wasn’t any actual reason for this. The course is free and accessible to everyone, and can be visited spontaneously. For me, however, it just didn’t feel right. It’s “my” course; I had only been there a few times and I still felt new. To go there with someone who would only come once didn’t sit easy with me. The teacher always gives her all for every pupil and it felt as if her trust would be betrayed if someone only came once.

Therefore, I thought about this and then wrote to the student explaining that I wouldn’t find it right to take her with me due to the reasons given above. It was an uncomfortable truth and I was scared that she would read my message and think, “Oh, God, what’s her problem,” etc.


However, she actually wrote back saying that it wasn’t a problem at all, and indeed it wasn’t. Despite my initial concerns, we continued to get on well with each other, I went to the course on my own, and it felt just perfect.

The second example to share is somewhat more difficult. It also concerns the desire of a person, which, on the surface, doesn’t seem to warrant any ill feeling. Recently my family and I had visitors and they wanted to stay a few days longer than planned. In his enthusiasm, my husband said straight away that it wasn’t a problem as we weren’t expecting any more guests until the next day.


RELATED: 8 ways to cultivate your authentic self

However, it was a problem for me! As I was sitting there in front of them all, I could hardly say that it was an issue and that I wanted them to leave on the day we’d agreed upon. In a situation like this, there are so many factors coming into play. Sometimes writing a list helps to organize our own thoughts and allows us to discover what our own desires really are. In this example of an uncomfortable truth, the following factors played a role:

My husband had already agreed to it
To cancel now would make it feel as if I were prioritizing my desire over his – although I’m certain that my husband didn’t really think too much about this when agreeing to it. On the contrary, he answered as people do out of politeness: “Sure, no problem. Stay as long as you like!” Perhaps he didn’t even consider what he really wanted? Perhaps he was scared to release his own uncomfortable truth.

Visits are stressful
Even though they’re uncomplicated guests, they’re still here. You have to interact; the kid is perhaps more hyperactive than usual; you have to cook – and clean – twice as much; if they try to help, you have to chat with them. You have to organize the keys... it’s just so different compared to your usual routine when you’re on your own.

Visitors want to experience something too
There’s so much going on right now in our day-to-day lives that I don’t need any more on my plate. I’m perfectly happy with my morning routine of sitting together with my kid being creative, or baking, cooking and gardening before going to work in the afternoon. I don’t have the strength or urge for going out on excursions.


So, how do others react when they are on the receiving end of an uncomfortable truth? Saying “Don’t you worry” or “How dare you”? Can friendships handle the truth? Is a visit a burden or a relief? These are questions which can help us find out which friends are good for us. Indeed, writing a list helps to organize our own thoughts and to address our own urges.


After reading my own list, it suddenly became clear to me: the visit after the holidays was the real reason why I’d like to stick to my original plan. I needed a few days rest to charge my batteries for visitors. Just a few days with my husband and kid. A few days of not having to explain what the plan is, why our kid is so grumpy all of a sudden, or why we only drink decaffeinated coffee, blah blah blah. 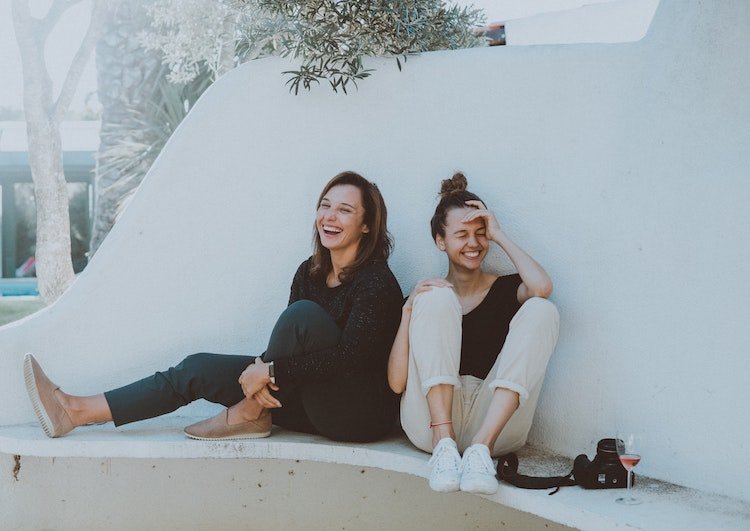 By speaking out about uncomfortable truths, friendships can actually be strengthened


Another reason why this uncomfortable truth was so uncomfortable was that it once more showed me how dull I had become! In my circle of friends I’m known as the one who goes to bed early, who prefers a quiet day indoors, and who doesn’t drink alcohol (I’m still breastfeeding, so I have a decent excuse for that at least!).


In short: I’m known for being boring. If I were to say now that it’s getting too much for me and that I need some peace and quiet, I’d be admitting as much. The others will think: “It’s obvious that she doesn’t want to do any of that. I thought so in the first place.” (Again, this is what I assume what others think of me, though perhaps I could be completely wrong.)


Of course, I also try to think about what my uncomfortable truth would mean for the other person: they may have to change their plans, they may need to book a bus which is more expensive, they may not know where they should travel to next. If I consider all these factors, which I assume are relevant for the others, it gives me a real headache.


All this sounds like I don’t like visitors. However, this isn’t the case. I love having visitors for two or three days or so but after that it gets too much for me. And yet, this isn’t always true either. Some visits aren’t tiring at all: when I get on really well with my guests, it doesn’t feel like we’re entertaining them, but as if they belong to the family. This however happens very rarely and when it does, it’s like a gift!

Speaking out about uncomfortable truths is not just liberating for yourself but can also lead to stronger and more trustworthy friendships. All these reasons contribute to uncomfortable truths and make it so difficult just to say them. We feel like we need to concede to the other’s desires, we need to be polite, we tell ourselves: “I guess it doesn’t really matter. I’ll get over it.”


Of course we’ll get over it – no question about it. I’d even have the strength to have visitors here the whole time from now to the end of the month, but that isn’t the point: I should be feeling well, and yes, I will choose to prioritize my happiness from now on!


Because if everyone did this then we’d all feel so satisfied that we wouldn’t have to be concerned about the happiness of others so much. Like the proverb says, 'life's what you make it'. On this I insist — I’m going to ensure of my own happiness and always speak out about any uncomfortable truths when needed. I suggest you try to do the same, even if it feels awkward at first. ●
Main image: shutterstock/fizkes

How do you deal with uncomfortable truths? Do you always speak out if something is not feeling quite right or do you just bottle things up? Share your experiences with the community below!

When she's not busy hugging trees or caressing mosses, Veronika is a freelance copywriter, writing about nature and sustainability.

Happiness.com » Magazine » PERSONAL GROWTH » Uncomfortable truths: how to say 'no' and prioritize your happiness