In the book, one of the characters, Doctor Manette, ends up in prison during the French Revolution. Debilitated by his unfair imprisonment, Doctor Manette tries to stay sane against the odds. A subject loosely taken from Dickens' biography, as during his youth he unsuccessfully tried to keep his father John out of jail, when he was sentenced for falling to repay a debt.


But what does this have to with happiness? Well, there's a growing body of scientific studies that examine the relationship between money and happiness or well-being.


On one hand, these studies focus on the positive effects of [increased] income. On the other, they focus on the ways in which we deal with economic hardship to maintain our sense of happiness and well-being. A study by Reeskens and Vandecasteele found that there are three factors that can soften, or as they call it, 'cushion', people facing economic hardship:

Money and happiness: some basic notions

In their article, Reeskens and Vandecasteele firstly discuss some of the common sense notions of happiness and well-being. The most basic one is that more money makes us happier. In a famous study by Princeton University, a magic number was put on the relation between happiness and income: $75,000 (€65,000).


According to this Princeton study, people that earn less than this sum, report lower happiness and emotional well-being than people that make $75,000 or more. As their income increased to this amount, respondents reported an increase in their sense of happiness. But the study found that an income increase above this figure does not lead to an increase in self-reported feelings of happiness and well-being.

Cash for questions: how do people cope with economic hardship?

So, does that mean that we should all aim to make $75,000 to be happy? No. In fact, a recent study by the London School of Economics, Origins of Happiness, has shown that most human misery can be attributed to failed relationships and mental and physical illness, not to money problems and poverty.


Indeed, social and psychological factors are more important to the well-being of individuals than income levels. As that study’s lead researcher, Lord Richard Layard stated: “Having a partner is as good for you as being made unemployed is bad for you.”

“Most human misery can be attributed to failed relationships and mental and physical illness, not to money problems and poverty.”


Reeskens and Vandecasteele focused their research on some of these social and psychological factors, in studying what happens because of the negative effect on subjective well-being caused by poverty and [economic] deprivation.


Here again, we find some common sense notions. The most basic one is that a negative effect on subjective well-being is caused by poverty and [economic] deprivation. But there are studies like Social comparisons of income in one’s community, that show that some people are more severely affected by economic hardship than others. How come?

But money does matter. Doesn't it?

Jumping forward to some of Reeskens and Vandecasteele’s conclusions: income does matter. According to their findings, up to 45 per cent of our sense of happiness, or lack thereof, can be explained by our economical situation. Economic hardship does decrease our sense of well-being. But economic situation is more than just our annual income. Factors that are important as well include:

In a glass-half-full-half-empty analogy, we can also conclude that if 45 per cent of our sense of happiness is material, economic, then 55 per cent is not. It's in this 55 per cent that three main immaterial factors come into play: social contacts, religious practice and confidence in politics.

What makes informal social contacts so important? According to a study by Halliwell and Putnam, The social context of well-being, social interactions, amongst others:

As Putnam famously put it: “Your chances of dying over the course of the next year are cut in half by joining one group, and cut to a quarter by joining two groups.” 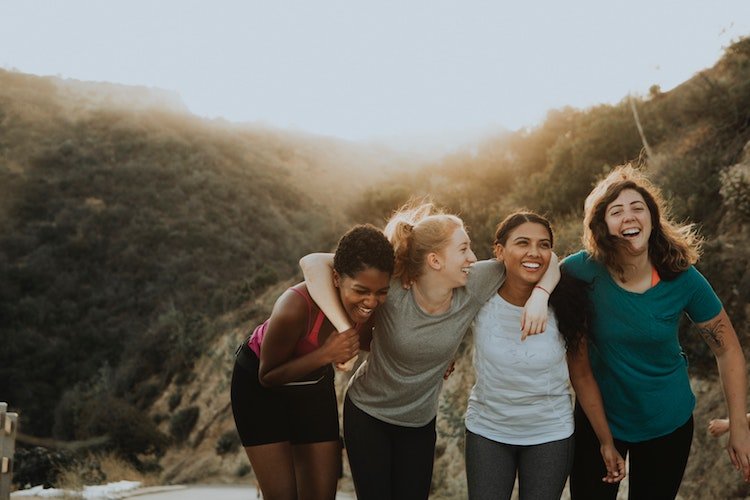 In it together: social contact helps you forget economic hardship


Reeskens and Vandecasteele show, by examining survey responses taken in more than 25 European countries, that having frequent contact with family, friends and colleagues strongly cushions the effect of [economic] deprivation on happiness.


The difference in happiness levels between people with higher incomes and those with economic deprivation dramatically drops when we look at people with frequent informal contacts. In other words: lonely affluent people are comparatively happier than lonely deprived people. Whereas socializing affluent people are still happier, but comparatively less happier than socializing deprived people.

“Having frequent contact with family, friends and colleagues strongly cushions the effect of [economic] deprivation on happiness.”


When facing economic hardship, we should try to maintain our social network, meet our friends, and go and see our family (although research shows this might be harder to do than when we have no financial concerns).

The second factor researched by Reeskens and Vandecasteele, religiosity, can also cushion the negative impact of economic hardship on our sense of happiness and well-being. There are two effects happening here. The first one is the social aspect of religion. Interaction with like-minded churchgoers through the support, companionship and sense of belonging that we can find in informal social contacts as well.


But with religion, this effect is “supercharged”, as Lim and Putnam describe in Religion, Social Networks, and Life Satisfaction. Supercharged, because the effect is bigger than with regular [non-religious] friends or family.


In this study by Lim and Putnam, it was also found that the other effect is a “private tie to God”, since religiosity offers “a comprehensive framework for the interpretation of world events”. Since religious people have a stronger sense that something outside of them controls things, they are also more likely to believe that their economic hardship will be alleviated by something external.

“Religiosity can also cushion the negative impact of economic hardship on our sense of happiness and well-being.”


When looking at the results in Reeskens’ and Vandecasteele’s research, taken from the same survey responses of 25 European countries, the effect of religiosity is relatively the smallest of the three factors, in “cushioning” the effect of economic hardship.


There's still a measurable, statistically significant increase in feelings of happiness and well-being between frequent church-going deprived people, and those that do not go to church, when comparing both of these groups with affluent people.


It must be noted, as Reeskens and Vandecasteele do, that this might be partially explained by cultural differences [the role of religiosity in Europe compared to the United States, for example]. When facing economic hardship, being religious or maintaining our religious practices helps in alleviating the effect of that hardship on our well-being.

Similar to the external effect that religiosity has on the deprived, believing that politicians can alter and influence their situation is also beneficial to a sense of well-being during economic hardship. A study by Catterberg and Moreno, The Individual Bass of Political Trust, has shown that in general, the [economic] deprived have a lower level of faith and confidence in politics. But Reeskens and Vandecasteele argue that among these economic deprived, the ones that do keep faith and confidence in politics, are happier than those that don’t.


Their results back up this claim. In the European survey responses the deprived respondents that had confidence in their governments, were happier than those deprived respondents who did not have that confidence. The differences are sharp. Pro-politics deprived people are only slightly less happy than their affluent counterparts. But negative-towards-politics deprived people are strongly less happy than their affluent counterparts.


When faced with economic hardship, people that have confidence in politics and government show more resilience against the negative psychological effects on happiness and well-being, than people that turn away from politics.

What to do in times of economic hardship

So, where do these studies leave us? First of all: money can make us happy – but only up to a certain point. How we spend money is also key to deriving happiness from it. And in times of economic hardship, there are certain factors that can help us cushion its effect. The most prominent ones are having informal social contacts, and keeping faith in politics. Being religious does help as well, but not as much.

For a totally different perspective on all of this, we can also start with the premise of psychologist Sonja Lyubomirsky’s book The How of Happiness. In it, she states, backed by other research, that 50 per cent of our happiness level is genetically determined [based on twin studies], 10 per cent is affected by life circumstances and situation, and 40 per cent is subject to self control and manipulation. When looked at it from that perspective, our economic circumstances are part of the 10 per cent that also include physical health, love relationships, feelings of safety, etc.


In that case, during periods of economic hardship it might be wise to focus more on the 40 per cent of things that we can change and manipulate, such as some of the strategies that Lyubomirsky proposes: cultivating optimism, to stop ruminating and to develop coping strategies. And also to start counting your blessings or carrying out gratitude practice, as hard as it may be when faced with the next bill or credit card statement! ●

While thinking about past actions can sometimes help you move forward in life, thinking too much can have the opposite effect and lead to depression

Discover the HAPPY token: our very own currency!

Start exploring the features on happiness.com and you’ll soon discover we have our very own internal currency – the HAPPY token – designed to