Do we need a new roadmap for getting older?

Old age can last half a century, says physician Louise Aronson, so it needs a better definition — and more praise. By Jenara Nerenberg on behalf of Greater Good Science Center.

What do you think of when you think of “old age?” Maybe you think of it as your time of decline — something to be avoided at all costs. Many of us imagine the few short years just before our death, rather than the long stretch of time often available to explore new interests and relationships and activities.


Author and physician Louise Aronson wants to change that. In her new book, Elderhood, she argues that old age or “elderhood” is a much richer, more nuanced experience than most people understand, and that treating it like an illness or pathology is the wrong approach.


She believes people need to embrace elderhood as another normal phase of life — just like childhood and adulthood — with its own challenges and rewards. By reclaiming the narrative around older age, she hopes to not only support elders, but to impact family life, health, research, policy, and society as a whole.


In our interview, we discuss this and more, including how to shift our attitudes around aging and what happiness looks like in elderhood.


Jenara Nerenberg: How do you define elderhood? What does the term mean to you?

Louise Aronson: I define elderhood as one of the three main phases of life — what comes after childhood and adulthood. It captures the years that begin between ages 60-70 and continue until a person’s death. And if a person lives until the age of 100, then that means elderhood lasts almost half a century.


Human civilizations from the ancient Greeks and Romans to the early Chinese and Egyptians have been defining old age beginning between 60-70. Because people don’t like hearing that it starts so young, they’ve pushed that to the extreme, whereby people think of “old” as a debilitating phase that only lasts the very few short years right before death.


JN: So what is the narrative shift or change in public conversation that you’d like to see happen regarding aging and elderhood?

LA: Part of why I wanted to introduce the term elderhood to a wider audience — I did not make it up — was so that we would begin thinking about elderhood the way we think about childhood and adulthood. “Old age” absent the term elderhood is the subject of a lot of prejudice and bias, so we end up with phrases like “silver tsunami” and “no one wants to be old” or “aging is life’s great disaster.”


By reframing it as this long phase of life with multiple sub-phases — just like childhood and adulthood — we take a broader approach and we can look at it as a society and community, and not just as individuals. So, right now having “old” be devalued, with everyone being meant to face it on their own, we hear questions like “can we cure aging?” Why are we treating something that is normal and natural and that has always existed as pathology? 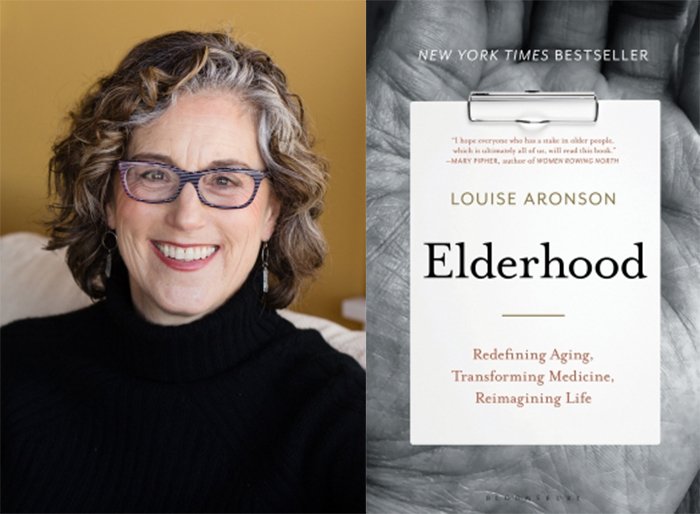 
Now, are there things that come with aging that we would feel much better without? Sure. But we don’t tend to pathologize other entire phases of life. Take adolescence. We recognize that there are behaviors that adolescents are more likely to do that are not good for them or society, but we don’t necessarily say we should get rid of adolescents the way that people often talk about older people. “Let’s go house them somewhere separately, let’s not think about them, let’s build a world for children and adults and then blame older people when that world doesn’t match with their needs or interests.”

JN: What compelled you to write the book now?

LA: There’s more and more out there about age, and there’s so much good stuff; but I felt like the most well-intentioned material was still insulting old age and old people by saying, “Old is only how you feel, 70 is the new 50, 100 is the new 70.” All these things are saying that being old is never in and of itself a good thing or a desirable thing and by extension people who are old are never good people or desirable people. I didn’t like that.

“Now, are there things that come with aging that we would feel much better without? Sure. But we don’t tend to pathologize other entire phases of life.”


I also didn’t see anything that pulled together all the different ways in which we’re addressing aging — culturally, medically, socially, historically. We tend to think we’re doing all these novel, innovative things with aging, and although some of the specifics differ, human thoughts and approaches about old age are pretty much the same as what we have in evidence from 2,000 to 5,000 years ago. The attempt to understand and adapt to aging is a very human task and such history shows how important these questions are and how existential they are.


JN: What changes would you like to see within academia and medicine to reflect the needs of elder people?


So, we say that older people are different, and yet we apply results from people different than them to them. Then we blame bad outcomes on old age rather than on what it was — a scientific setup that was destined to fail or hurt people because it didn’t study the target population adequately.

JN: Do you think there’s a different conception of happiness that emerges during elderhood?

LA: That’s such a good question. Most people are shocked to learn that happiness and life satisfaction go way up just before 60 and continuing into the 80s. So people who are older are much happier than adults in midlife, on average. On average people get happier, and part of that has to do with a real comfort with self and confidence in one’s priorities so that people are more focused on spending time in ways they value and on spending time with people that they value. So their life becomes positive and self-reinforcing.


Another thing that was just reported this year is that older people generally rate their health pretty good. They look around at other people and generally conclude that, yes, their health is better than they thought it would be. So some of this is about having perspective, which takes decades, and also a comfort with who you are and where you are.

“Most people are shocked to learnt that happiness and life satisfaction go way up just before 60 and continuing into the 80s.”

And when you think about things like meditation and mindfulness and retreats and such, these are the things that elders are best at naturally. So it’s really interesting that we have this untapped population group that are doing the exact things that so many adults are hungry for and yet adults still disparage the very group that is living the things they wish for themselves.


JN: How can younger generations be more supportive in helping to shift the elderhood narrative?

LA: I think it has to be bidirectional because we have so much to learn from each other. There are increasing reports of old people giving relationship, career, and love advice to younger people and then younger people giving advice on tech and things like that. Everybody has their strengths, and I think the best relationships are the ones that work in both directions.


RELATED: What teens gain when they contribute to social groups

More and more older people are working, exercising, doing all these things we consider “normal activities.” Part of that is cultural change and reminds me of when my mother was in school and they played basketball. They weren’t allowed to go past half court because their “frail” female bodies would be “adversely affected” and they’d have trouble “bearing children.” We have these prejudices, so we really need to push against them.


So how do you build a world that is set up for all of us throughout our lives, from childhood to adulthood and elderhood? That’s an exciting challenge that has so much exciting potential for innovation — not just in science and medicine but in tech, art, culture, and society. Whatever anybody is doing, this is the growing segment of the population and they are eager to partner with younger people to make the world better for aging. ●

Enjoying a siesta was once thought of as a sign of laziness. But, as Dee Marques explains, the science-backed benefits of cat naps are potent – from

Meditation for confidence: how to practise it

Confidence is a powerful quality that sometimes slips away from us. But you can rebuild and strengthen it confidence with meditation. Ann Vrlak

Happiness.com » Magazine » HEALTH & BODY » Do we need a new roadmap for getting older?