When Jacqui Paterson started stargazing with her kids during the COVID pandemic, it changed their lives for the better. She explains the power of gazing at the stars and the proven benefits of this awe-evoking (and free!) activity.

I’m a glass-half-full girl by nature, but even I was struggling earlier in the year. A terrifying virus was tearing across the planet and the entire world had ground to a halt; I was consumed with worry about my family and paying the bills, and whether life would ever be the same again.


Then, one evening I went outside and stopped dead in my tracks. The sky was clear and pitch black, and the stars were shining so brightly I literally gasped. As I stood under that twinkling ceiling, gazing at the stars, I was overwhelmed with wonder.


I remembered an app I’d downloaded a couple of months earlier, which identifies all the stars, constellations, satellites and planets. Calling my daughters, aged 10 and 12, we raced upstairs, where we had an unobstructed view across the night sky.


Using the app, we were thrilled to discover that bright white star hovering over the horizon was actually Venus. We skimmed past Betelguese – a dying red supergiant star 700 times the size of Earth – and through the constellations of Gemini, Auriga and Perseus. 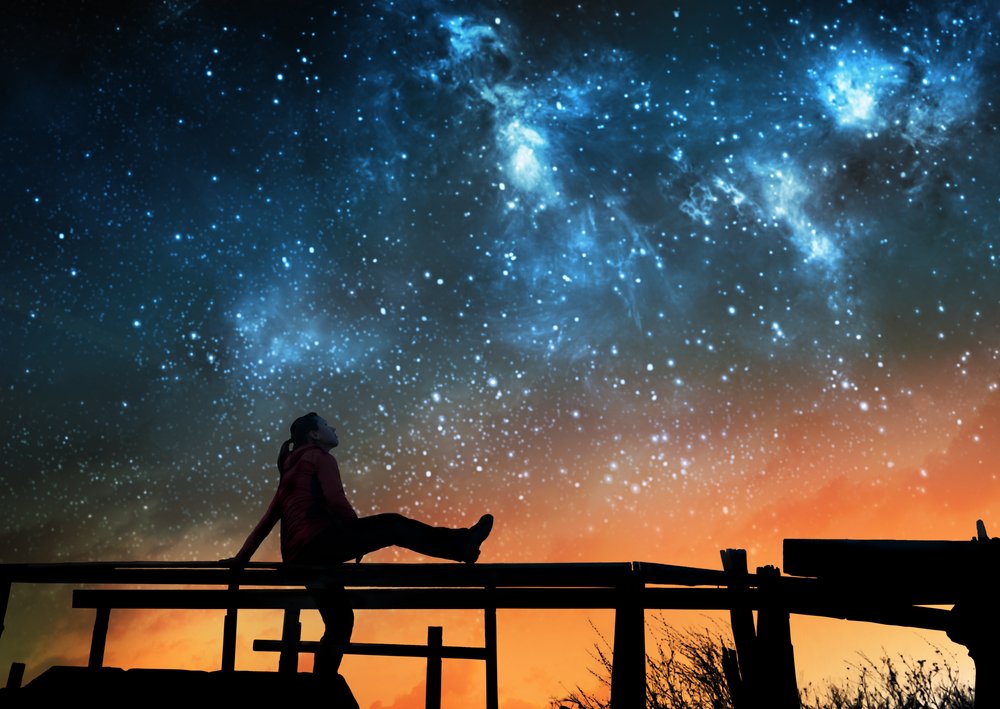 Gazing at the stars has meditative benefits shutterstock/VARUNA

In that moment the world no longer seemed like an unfamiliar place. It reminded me that the Earth had been around for 4.5 billion years and had endured things much more dramatic than a virus, which instantly brought my worries into perspective.


Plus, that twinkling night sky was just so beautiful – so stop-you-in-your-tracks gorgeous – I felt happier and calmer just looking at it. It became our thing to sit at the window evening, gazing at the stars. Not only did it help us let go of that nervous lockdown energy, for half an hour each day we got to ‘travel’ outside our four walls.

So, what is stargazing? For a start, it’s nothing new; for millennia humans have looked to the skies for guidance and reassurance, and to find meaning and purpose in their existence.


“The sky has been a part of human experience since we were able to think, in some form or manner,” says Dr Daniel Brown, Associate Professor in Astronomy and Science Communication for Nottingham Trent University.


It’s been used to construct time and mark the passage of it, while celestial navigation – using the stars as reference points – has helped us explore the Earth for over 5,000 years.


Astronomy has provided us with that link between sky and Earth; a way for us to understand and engage with the heavens. Constellations have always played their own important role too, Dr Brown says. So much so, rock paintings depicting them have been found dating back over 40,000 years.


“The sky was clear and pitch black, and the stars were shining so brightly I literally gasped. As I stood under that twinkling ceiling, gazing at the stars, I was overwhelmed with wonder.”

Perhaps surprisingly, the constellations have remained practically unchanged since being deciphered and named by Greek astronomer Ptolemy in the 2nd century AD, even resisting an attempt 1,400 years later, by Julius Schiller, to reimagine the stars into biblical and early Christian figures.


Its offshoot, astrology (once an accepted part of astronomy, but now considered a ‘pseudo-science’), is also thought to have played a valuable part by helping society to make sense of different people and personalities.

How can I do stargazing?

Perhaps the biggest advantage of gazing at the stars is that it’s free and accessible to every person on the planet – regardless of how, or where, you live. It can be carried out with the naked eye; alternatively, there are telescopes to suit all budgets and smartphone apps that bring ancient skies to life with augmented reality technology.


The darker the sky the better, as the stars can shine in their full and natural glory.


The International Dark Sky Places conservation program has curated a list of parks and reserves that are completely undiluted by light pollution. While these conditions are ideal for gazing at the stars, you can try it anywhere with a view of the clear sky (you might need to focus more in urban areas to block out distracting light and noise).


Dress appropriately – you don’t want your meditation cut short because you’re cold – and find yourself a safe, comfortable spot with a clear view of the sky, like open parkland, or your back garden. If you’re planning to stargaze in the city, get as high up as you can; good spots include rooftop gardens, skylights or even looking out of large windows.


Turn off all the lights you can, allow your eyes time to adjust to the darkness, then scan the skies for a particular spot or star to concentrate on. Soften your gaze and look slightly away from your target to see it more clearly (this is called averted vision and works because the cells in the sides of our eyes process low light better than the ones in the centre of your eye).


Use an app to identify stars and constellations, and even the odd satellite looping overhead, or go ‘old school’ with a penlight and a stargazing guidebook. Alternatively, don’t even try to work out what you’re looking out, just lie back and enjoy the celestial show.


While gazing at the stars, be conscious of your breath slowing and your body relaxing. Take in the sights, but also the sounds and sensations. Let your mind drift where it may; if irrelevant thoughts intrude, acknowledge them and let them go.


Try not to feel frustrated if your meditation doesn’t go to plan, says Mark Westmoquette, author of Mindful Thoughts for Stargazers – find your inner universe and the recently released Mindful Universe.


If the night is overcast, focus instead on the movement of the clouds and the way the stars intermittently peek out, he suggests, and appreciate the sky’s beautiful, changing nature.

The benefits of gazing at the stars

Westmoquette has a rare insight into both the science of stargazing, and its meditative effects. In 2013 he left a career in astronomy research to become a full-time yoga and meditation teacher. Today he melds both worlds by running monthly stargazing evenings from his home of St Helena, a tiny volcanic island in the South Atlantic.


“I began to see how the tools of mindfulness could equally apply to stargazing, and how it could be a very mindful activity,” he explains.


“During periods of worry and anxiety, when you find yourself lying awake at night, the familiar constellations and the slow wheeling of the heavens can be a reassuring source of comfort,” says Westmoquette. “Looking up at the stars can become a silent retreat into wonder and awe. I find that considering the enormity of space and time and the existence of our tiny planet within that, always helps put my personal worries into perspective.”


The eternal nature of the heavens can also bring comfort. When we look upwards, we’re essentially seeing the same stars and planets as our ancestors, and their ancestors and their ancestors before them, Westmoquette says. There’s something comforting about having that constant, especially when the world is in a state of flux. 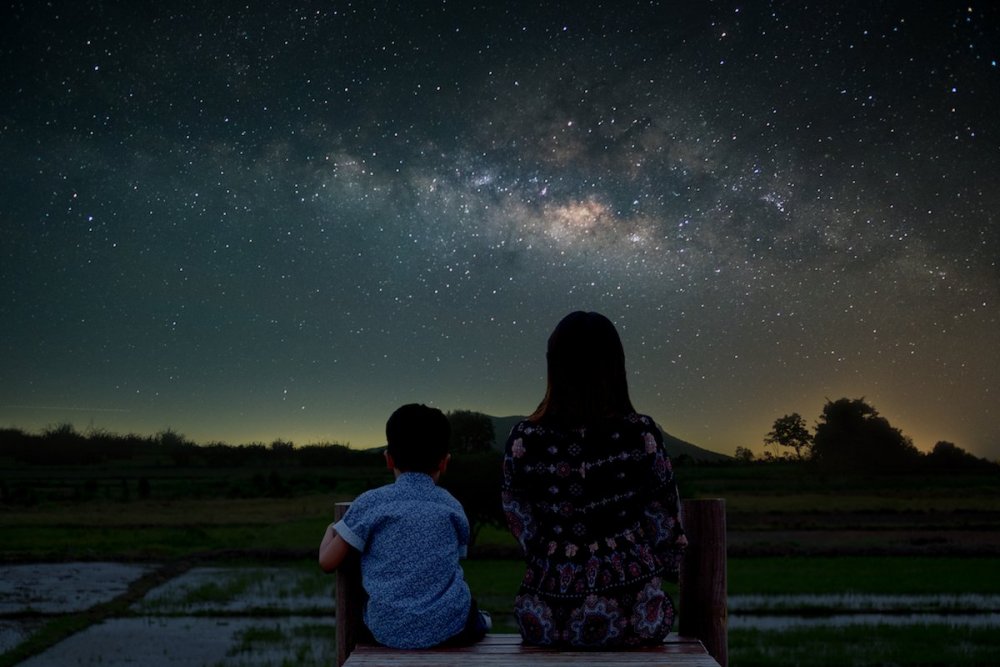 
According to psychologist Dr Katie Sparks, time spent in nature helps our bodies return to a natural rhythm. “We are part of nature, but we have become detached from it,” she says. “The demands on our attention from our fast pace of life are exhausting us both mentally and physically.”


When we return to nature – by going for a walk, or gardening, or gazing at the stars – this calming contrast becomes obvious, she says. “The focus is shifted off our minds, which are constantly churning, and into our bodies. This helps to relax us physically, as we can then notice any bodily tension and breathe into it. It also helps us relax mentally by giving ourselves a break from our thoughts.”

“While gazing at the stars, be conscious of your breath slowing and your body relaxing. Take in the sights, but also the sounds and sensations. Let your mind drift where it may.”

In a year when school has been turned upside down, gazing at the stars is also a fun activity to enjoy with children. When they ask, ‘what is stargazing?’ you can reply by teaching them astronomy, or philosophy (opening up conversations about why we’re here, and whether there is a higher power, or a grand design), or even by discussing legends and folklore.


You can even watch the International Space Station arcing across the sky, and imagine what the astronauts are doing as they look back down on the Blue Planet.


Learning about the infinite worlds beyond our own can help replace their anxious thoughts with ones of fascination and wonder instead. Studies have shown that experiencing a sense of awe – a feeling of reverential respect mixed with fear or wonder – prompts us to think outside of our own selfish needs and increases humility, helping us accept and appreciate life.


So next time you’re feeling anxious and overwhelmed by life, the solution could be, literally, written in the stars. •

Jacqui has been a true-life and travel journalist for over 25 years, and has travelled all over the world telling people's stories. Originally from New Zealand, she's now based in the UK, where she also wrangles two pre-teen daughters, and runs her lifestyle blog, Jacqui Paterson.com.

Happiness.com » Magazine » INSPIRATION & SPIRITUALITY » Gazing at the stars: replacing your worries with wonder