The Bright Side: positive news from February

February may be the shortest month, but it wasn't short of positive news stories. From a smart new way to reuse plastic bags to mindfulness classes in schools, here's the Top 10 happy news round-up from Ed Gould.

1. New use for plastic bags

You might think that single-use plastic bags offered no hope, but according to reports in the USA, they may soon be used to help power gadgets, such as mobile phones. A team from Purdue University in the States and the Universidad Tecnológica de Querétaro in Mexico have developed a way to collect the carbon from the polythene such bags are usually made from. By harvesting it rather than binning it, they can be made into electrical components used in the sort of batteries found in smartphones. Who would have though it possible?

The battle against cancer takes many forms. In a new approach, medics in Boston have developed a patch which will work to destroy tumours in certain situations. The patch can be applied onto a patient’s skin – close to the affected area – which doctors hope will reduce the levels of discomfort patients feel from conventional treatments. Dr Manijeh Goldberg worked on the idea to try and help patients with ailments like oral cancer, which often results in intrusive surgery. Her use of nano-technology tries to target chemicals just where they are needed in a more targeted approach. Trials are ongoing according to reports by CBS.

3. Reptile back from extension

In news that will bring happiness to all animal lovers, a species of tortoise that was long thought to be extinct has been spotted again. Last seen at the start of the 20th century, the Galapagos tortoise has been seen on the archipelago. The announcement came from Ecuador's Environment Ministry and was welcomed around the globe.

Shell shocked: the Galapagos tortoise is back!

It’s long been the hope of engineers to find a way to store electrical power derived from renewable sources without using conventional batteries (which have their own environmental issues). In positive news from the Chalmers University of Technology in Sweden, a group of researchers have developed a new liquid which can store energy from the sun. The so-called Molecular Solar Thermal Energy Storage will be able to run through many cycles before it stops functioning effectively. Stored at room temperature, all that’s needed is for a catalyst to be added to release the energy-giving power of the liquid. One variant of the fluid has been found to be very effective. Indeed, it can store around 250 watt-hours of energy per kilo, the researchers claim.

One of the big problems with dyeing fabrics for clothes and linen is that it takes a lot of chemicals and water. In order to come up with a greener solution, a Dutch company, DyeCoo, has developed a commercial system which, instead, harnesses carbon dioxide. According to GreenBiz, by pressurising it, the cleantech company has been able to fix colours to textiles without using so much of the world's resources. What's more, the carbon dioxide is recycled and doesn't escape to the atmosphere. Smart stuff!

6. Mindfulness classes to be taught in English schools

The Department for Education in the UK announced that English schools will take part in a trial of mindfulness and relaxation, which will run until 2021. The techniques that children will learn include deep breathing and emotion regulation. It’s hoped this will lead to some positive news concerning the country's mental health crisis among teenagers, as youngsters become better equipped to handle the pressures of growing up and school life. According to ITV, over 350 primary and junior schools will take place in the trial over nine different educational authorities.

Class act: kids in England will get mindfulness classes

7. Acupuncture could help women in menopause

A Professor at the University of Exeter, Edzard Ernst, has claimed that symptoms caused by the menopause have been scientifically proven to improve with acupuncture treatments. The academic was reported in The Times as saying that sweating, hot flushes and mood swings – among other symptoms – were all less severe following treatments. The study involved a trial of 70 women going through the menopause.

8. Floating bins used to clean up the seas

As widely reported, a group of Australian surfers have come up with a novel approach to keep the ocean clear of rubbish. In positive news for marine life everywhere, they’ve developed a bin that floats on the surface and captures rubbish, much like a lobster pot. The prototype Seabin – as they call their device – has been tested in a marina. In little over a week, more than a dozen types of plastic were captured. Cleverly, the Seabin makes a noise as it floats in the water, deterring fish and other creatures from going inside. Many hope the system can be upscaled to provide the marine environment with a chance of being rid of the rubbish that currently pollutes it.

RELATED: The Bright Side – positive news from December

9. The world is getting greener

If you think the planet is becoming more and more deforested you’re not alone. However, NASA has brought a little happiness to this gloomy view. Its satellite imagery has shown that there are more trees, not fewer, than a few years ago. As reported by CNN, the US space agency has noted that both India and China have been planting trees and agricultural crops that have created more vegetation overall. Since 2000, it’s estimated that leaf-covered spaces of the planet have risen by some 2,000,000 square miles. 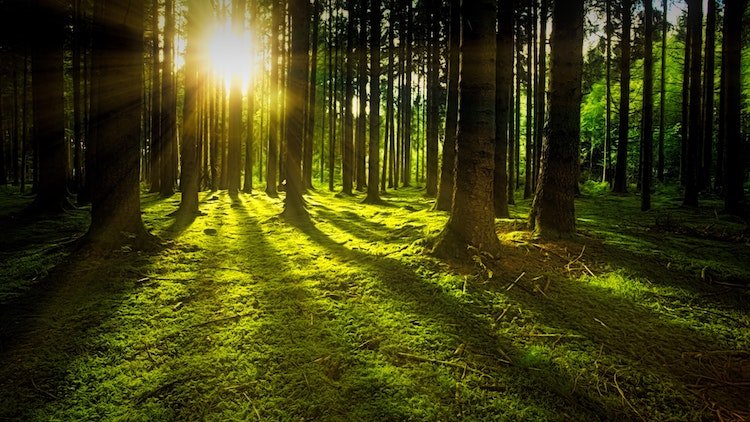 Green is go: there are more trees than ever before

In an announcement made in February, a team of researchers from the Universities of Exeter and Oxford, UK, said that being kind to yourself not only helps your mental well-being but aids your physical state. According to Dr Hans Kirschner, who led the study in Exeter, being kind allows the mind to relax which, in turn, puts the body into a state where it can heal itself better. It’s even thought that kindness may lead to an improved auto-immune response in people who show more self-compassion. The scientists trialled their ideas with a group who were given audio recordings to listen to, some of which suggested greater self-compassion and others of which did not. Those who were not in the control group responded favourably. ●