Lunar living: harnessing the power of the moon

Through time many religions have harnessed the power of the moon for its benefit on humanity. Jacqui Paterson explores so-called lunar living – using the influence of the moon to tap back into natural bodily rhythms and bring about positive change.

From the dawn of human consciousness, we’ve been enthralled by the moon.

Eternally circling the Earth, this celestial body has inspired everything from artwork and songs, to philosophy and the first human space exploration.

Calculated to be 4.5 billion years old, the moon is the slightly younger offspring of the Earth. Current belief is that it was formed when a Mars-sized object slammed into our fledging planet, shearing off some of the outer layers and exploding the material outwards. Gravity quickly moulded the debris from both the bodies into a ball, which was then locked in a circling orbit around Earth.

There’s no mistaking the symbiotic relationship the moon has with Earth. Bound together by each other’s gravity (ours is stronger, which is why the moon is in our orbit, and not the other way around) the moon even helped make Earth habitable by throwing its gravitational lasso around the planet. This slowed and stabilised its rotation, securing it at just the right tilt to allow the climate conditions that encouraged life to evolve.

Indeed, we owe life, as we know it, to the moon.

Humanity: the link to the moon

We see its influence every single day in the changing of the tides. Although nearly 240,000 miles away, its gravitational pull is powerful enough to lift and drop the waters of our oceans, called the tidal force. In the UK’s Bristol Channel, which has the second-highest tidal range in the world, the difference between low and high tide can be a jaw-dropping 14 metres.

The moon and the tide are so intrinsically linked it’s easy to understand why people believe a magical bond exists to this day. It’s a much-repeated fact that up to 60 per cent of the adult human body is made up of water; if the moon can have this much physical impact on the water of our planet, is it feasible it could have an influence on our bodies too? 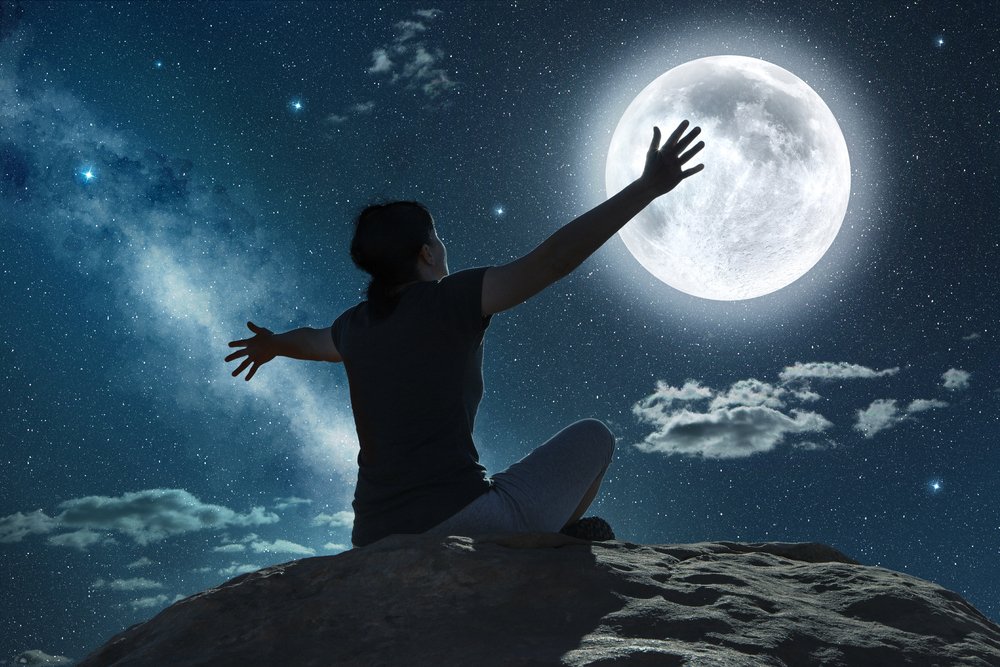 Lunar living: could the moon influence our body? shutterstock/paulista

Science hasn’t decisively proven any such link, but there is still much we need to understand, for example – why some studies have indicated human sleep patterns are affected by different lunar phases.

Oftentimes, the ‘magic’ of the moon is not tangible: think of the sense of wonder and well-being you feel simply from gazing at the moon at its full, shining finest. The humbling majesty of a supermoon, when the full moon coincides with the satellite being at its closest point to Earth and seems big enough to swallow up the entire night sky.


RELATED: Gazing at the stars – replacing your worries with wonder

Imagine being born hundreds of years ago, before the scientific know-how of today, and seeing the moon wax and wane over the weeks, sometimes disappearing completely and other times shining so brightly farmers could harvest crops into the night using just its luminescence.

“The moon and the tide are so intrinsically linked it’s easy to understand why people believe a magical bond exists to this day.”

Moonlight is the subject of countless songs, poems and sonnets, but it’s actually a misnomer, as the moon generates no light at all. The magical luminescence we’ve marvelled at for thousands of years comes partly from the light of distant stars and our own ‘Earthshine’, but mostly it’s the light of the sun reflecting off its surface.

As the moon circles around the Earth, it passes between us and the sun. At that point, the half lit by the Sun faces away from us so we can only see the side in total darkness, giving the illusion that there is no moon in the sky – called the new moon.

Continuing its elliptical orbit, light begins to reach the visible surface again, revealing the moon in slices – first the crescent, quarter, gibbous (three-quarter), then the full moon as the entire surface is exposed to the illumination of the sun.

A growing moon is described as ‘waxing’ and as it moves away and begins to lose its full sheen, it’s called waning. The process then continues, with the shadow now moving across the other side of the moon, going to gibbous, last quarter, crescent, then back to the darkened new moon. The entire process takes an average of 29.5 days.

Over the millennia, this perpetual routine has been used mark the passing of time and seasons. It’s been used by many civilisations to herald Pagan and religious ceremonies. It’s also been vitally important for agriculture over the centuries, telling farmers when to hunt, plant and harvest their crops.

The word month actually takes its roots from the word Moon and the lunar calendar used by the Romans eventually evolved into the Gregorian calendar we use today.

Lunar living: connecting to the moon

While we no longer need the moon to tell us what we should be doing and when (we now have smartphones and watches to do that) more and more people are turning back to this pock-marked celestial body to find respite from the demands of modern life.

Indeed, moon magic has long been practised in Paganism and different religions over the centuries. In more modern times, these same techniques have been harnessed and honed by people who believe the gravitational tug of the moon directly influences our energy and motivation levels. 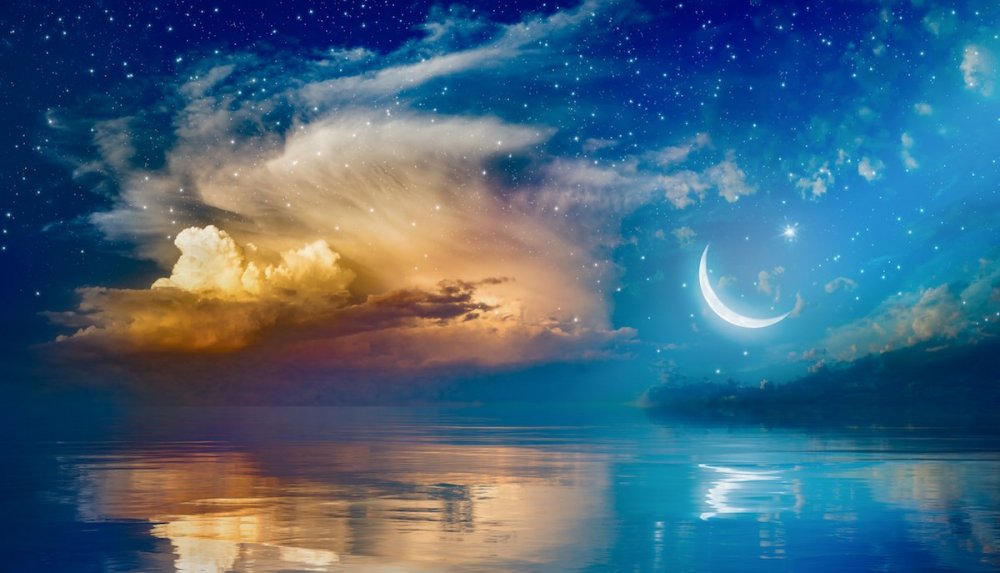 Many religions celebrate the magical nature of the moon


Yoga and meditation teacher and self-titled ‘Moon Mentor’, Kirsty Gallagher, has spent ten years exploring how to harness this ancient influence to tap back into the natural rhythms of your body and bring positive changes to your life.

As we all know from personal experience, modern life can be relentless, and somewhere along the way we’ve stopped taking time for ourselves. Many people wear their burnout like a badge of honour, but this can be a damaging way to live – mentally and physically.

‘Tiredness, exhaustion, overwhelm, begrudgingly saying yes, feeling taken advantage of, snapping and losing it when it all gets too much are all sure signs that something is out of alignment and you are in need of some self-care and time out,’ Kirsty writes in her Sunday Times bestselling book, Lunar Living.

So, how do we get off the hamster wheel? Look to the moon, Kirsty advises.

‘﻿One of the moon’s biggest teachings is that there is a time to be and a time to do. Even the moon doesn’t shine at her brightest 365 days of the year, ﻿showing us that if we don’t take time out to rest, we’ll have no energy, inspiration or motivation when it’s our time to shine!’

In fact, for a few days every month, the moon disappears from view. This is when you should ‘disappear’ too, Kirsty suggests. Not literally, but metaphorically – pressing pause on your regular life to rest and reflect. This could mean taking a day off work to journal and meditate, or even just carving an hour out of your day to unapologetically practise some self-care.

“Lunar Living gives you rhyme and reason, rhythm and flow, purpose and permission. It helps you to take back control of your life.”

The new moon symbolises wiping the slate clean, recharging and getting ready to renew. It’s a time to turn inwards to listen to your intuition, visualize your dreams and crystallize your thoughts, making it perfect time to figure out a new direction for your life or career, or even address personal issues.

Ophira and Tali Edut are US celebrity astrologers, also known as the AstroTwins. Writing for the mindbodygreen website, they advise us to view the new moon as a ‘cosmic reset’, a time to connect to those lunar energies and set new goals.

As the moon moves from crescent to quarter, and light returns, we begin to see life more brightly and clearly, the pair explains. Use this time to research ideas and start building momentum for a new project or goal. Spot obstacles and find ways to clear them.

Over the weeks, the moon acts like a celestial alarm clock, keeping you on track and reminding you to keep moving forward.

And by the time of the full moon, your thoughts should be as bright and clear as the night skies; now is the time to assess exactly where you are and make decisions. What is working and what is not? Do you plough forward, or change direction?

As the light begins to wane again, this is time to cross that finish line and ‘harvest’ the rewards of those projects started nearly a month before. The final days are used to tie up loose ends and also sit for a while in that sense of achievement.

When the moon silently slips back into the shadows, once again it’s time again for meditation, visualization and introspection.

Synching yourself with moon phases may be an ancient concept, but its arguably more relevant to modern life than ever.

As Kirsty writes: ‘Lunar Living gives you rhyme and reason, rhythm and flow, purpose and permission. It helps you to take back control of your life.’ • Jacqui has been a true-life and travel journalist for over 25 years and has travelled all over the world telling people's stories. Originally from New Zealand, she's now based in the UK, where she also wrangles two pre-teen daughters, and runs her lifestyle blog, Jacqui Paterson.com

My Sexual Journey Has Taught Me Many Things
Sexuality is not a black and white field. It's an abstract painting in thousands of colors. The